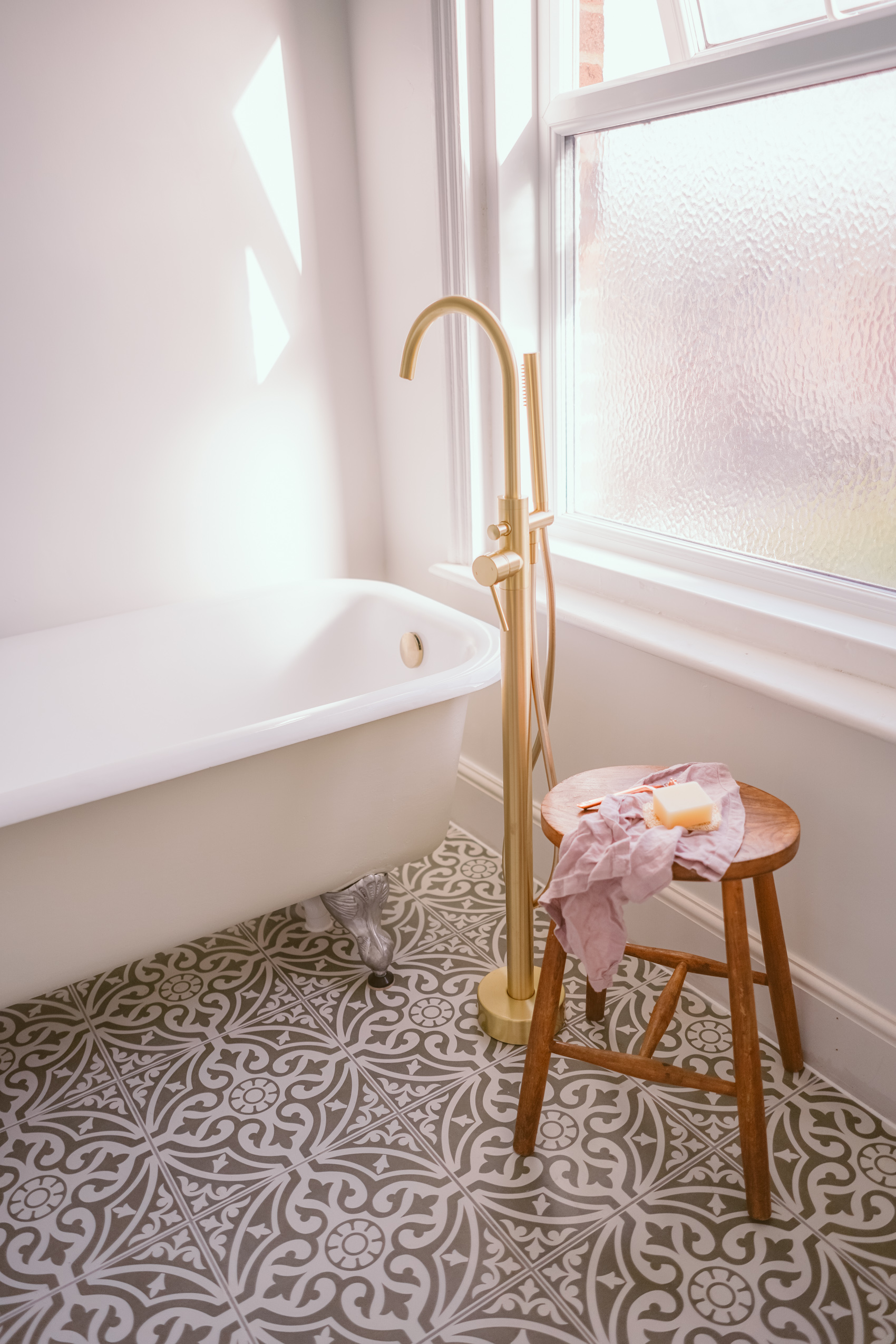 Today I am so excited to share with you our months long process of renovating our bathroom. Let me show you a before photo right away, so you can see what you’re in for in this blogpost 🙂 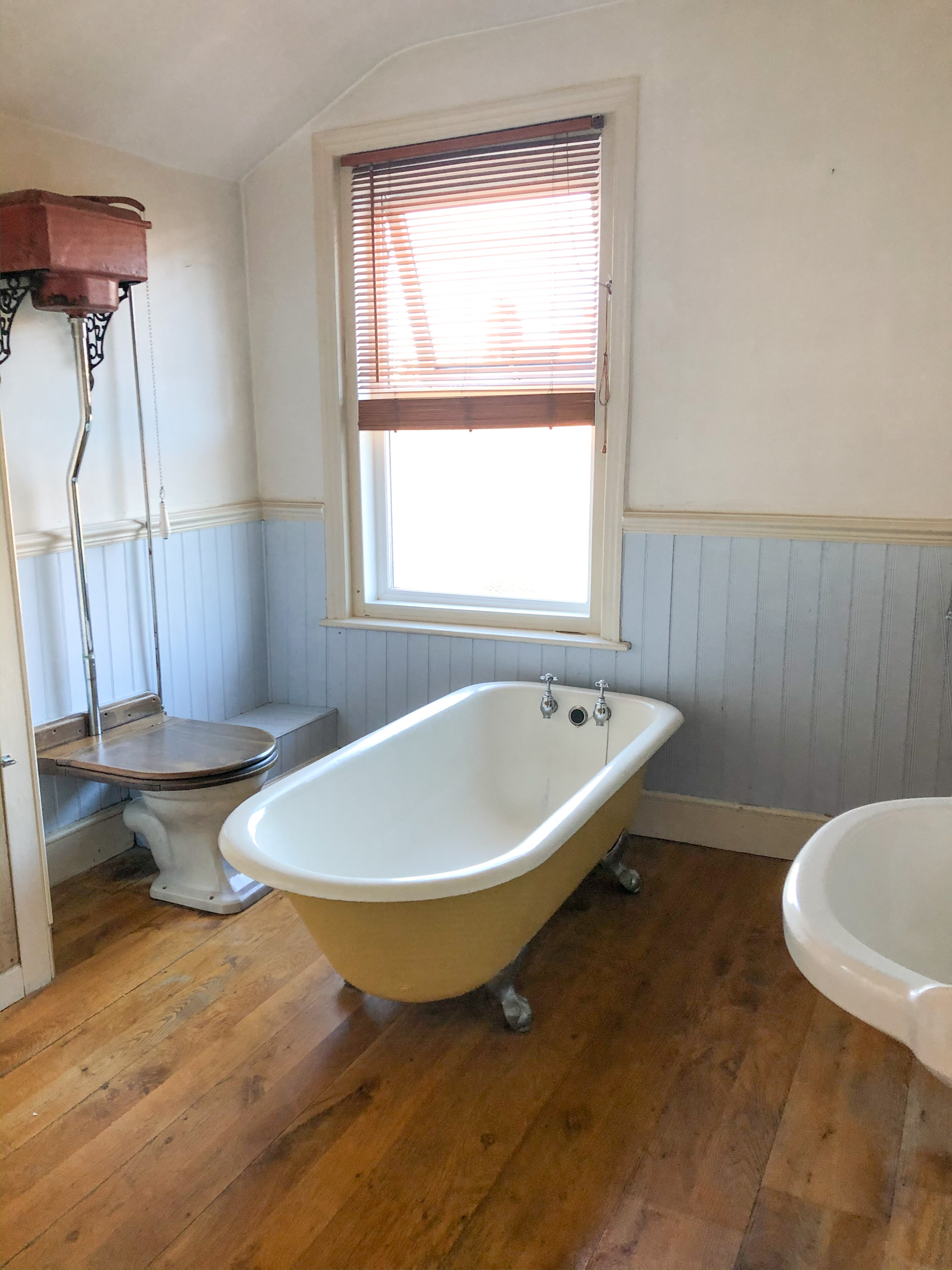 Honestly? My husband and I actually hadn’t planned on such a big and quick bathroom makeover.

When we moved into the house in August 2020, we were actually quite happy with the bathroom. It was only on closer inspection that we could see that the shower was a very very bad DIY project and unfortunately was not water tight, and actually broken in some parts and very strangely built.

Our first plan was to just replace parts of the bathroom, like the shower, the toilet, the sink as well as restoring the bathtub. The rest we just wanted to paint, maybe do some renovation here and there, but not tear out any walls or floors.

Well, then at the end of October our big renovation work on the extension and in the kitchen started and we were told that the bathroom floor above the kitchen had to be torn out. And that was to put in new steel beams from underneath (more on that another time, but in short: the addition had to be completely redone and steel beams replaced since there weren’t any in there, and new steel beams put in since we wanted to enlarge the opening between the dining room and kitchen).

So we decided to change our plans and just go ahead and completely redo the bathroom. This means new flooring, underfloor heating, new radiator, new plumbing, new room layout, in sum: everything new.

Here are two before photos of how the bathroom looked before the renovation work: 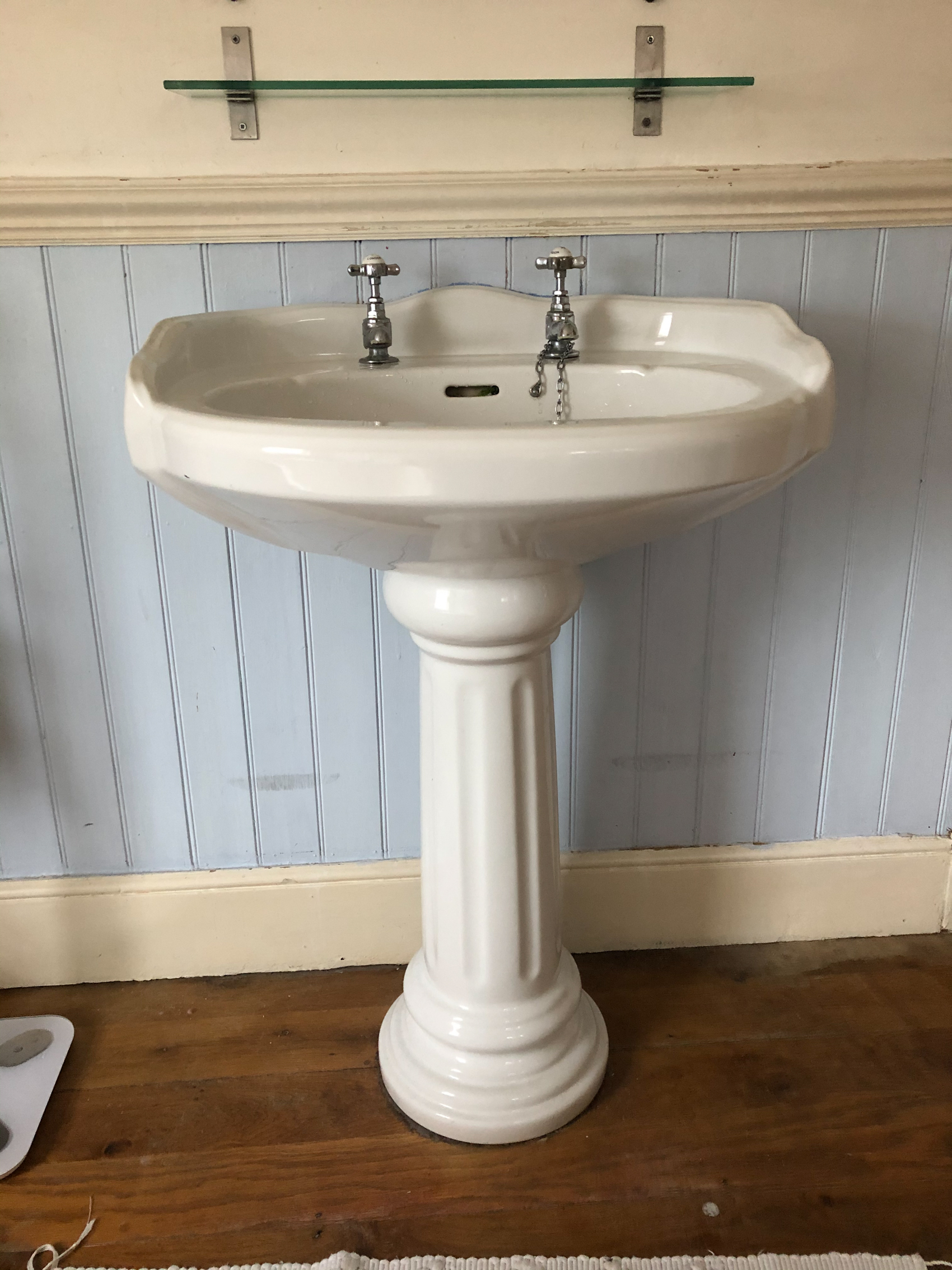 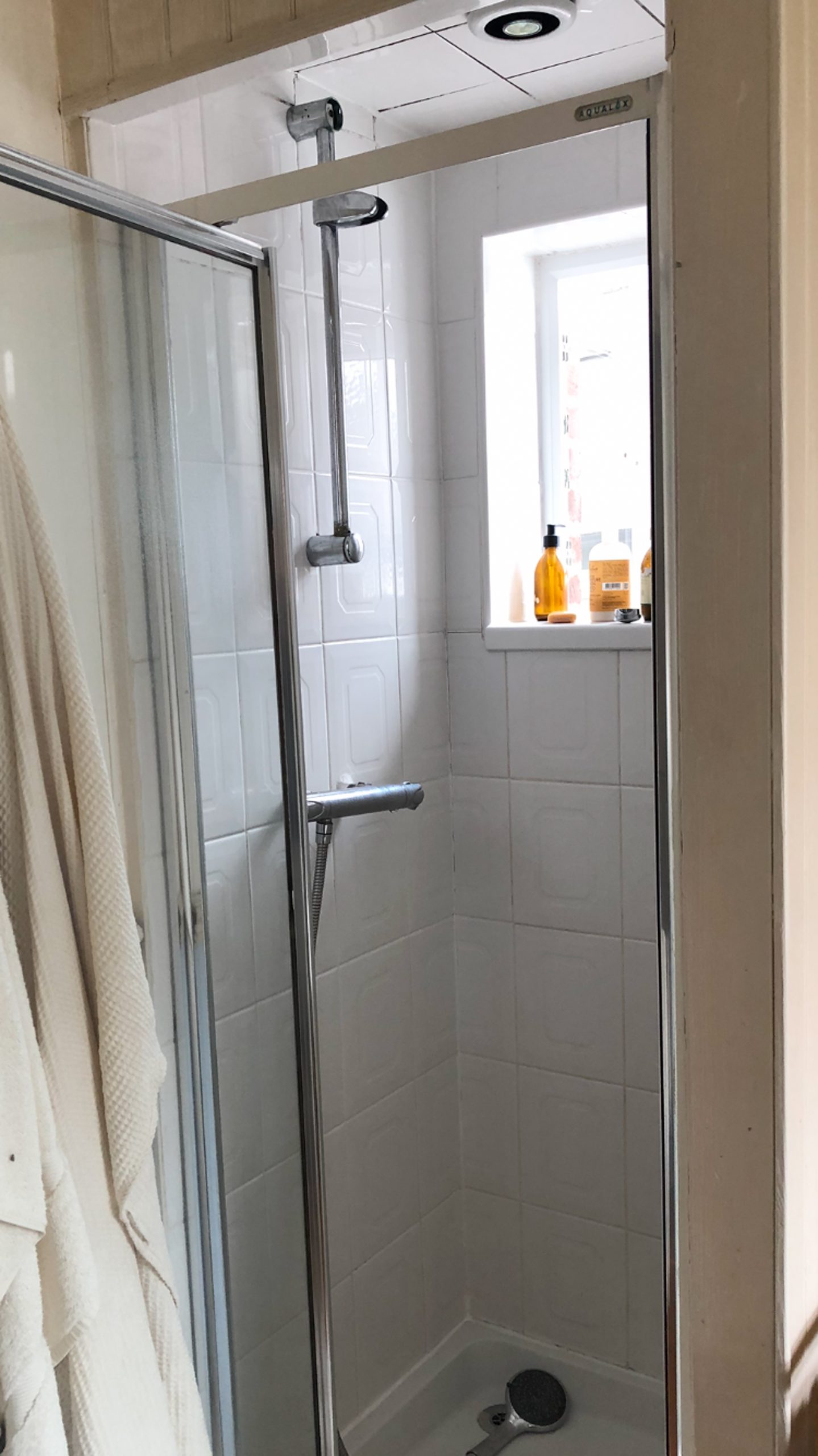 In November, things got underway and the bathroom was actually completely torn out. Jesse and I started the demolition work, but of course we left all the plumbing work to the professionals. 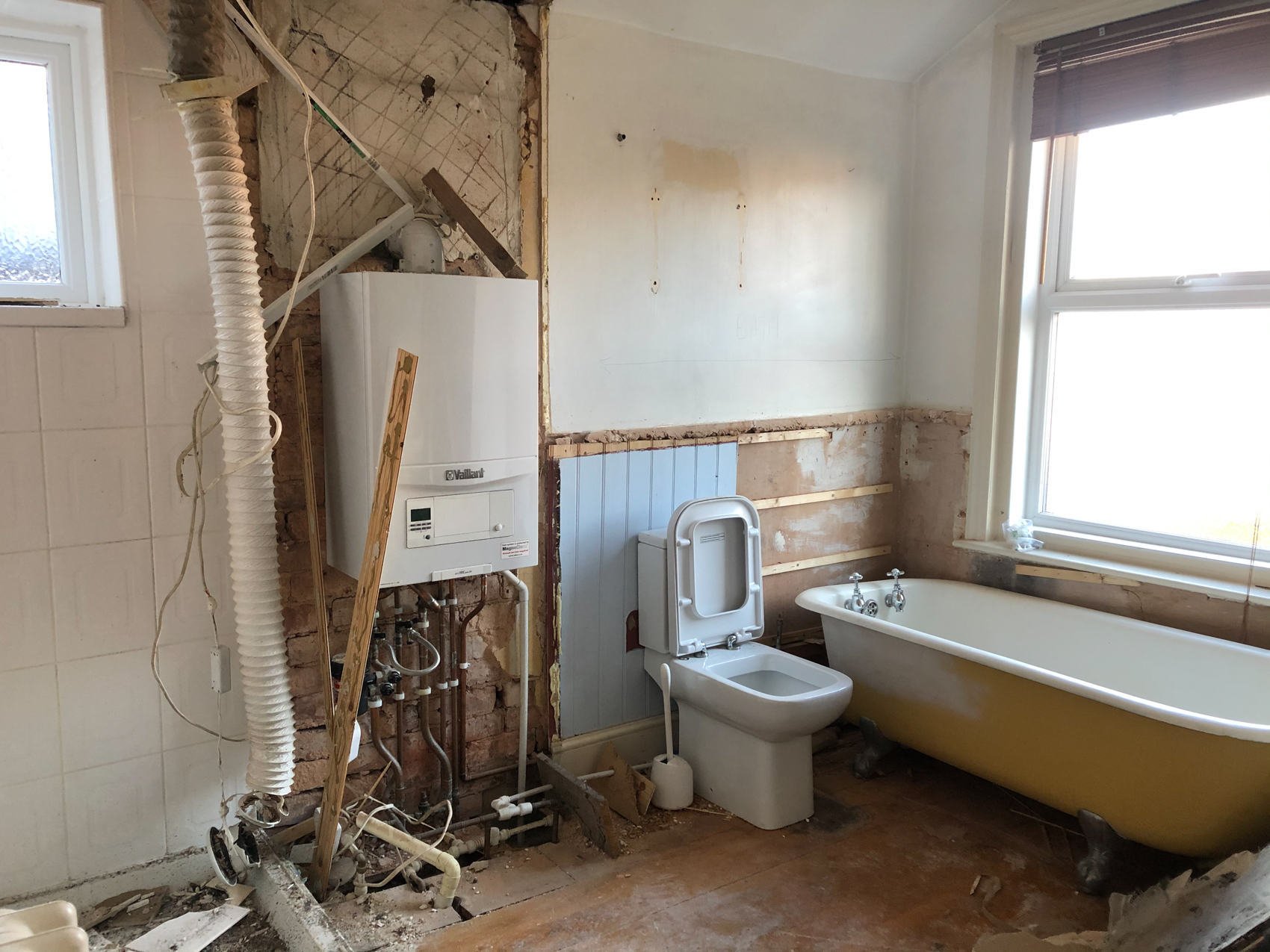 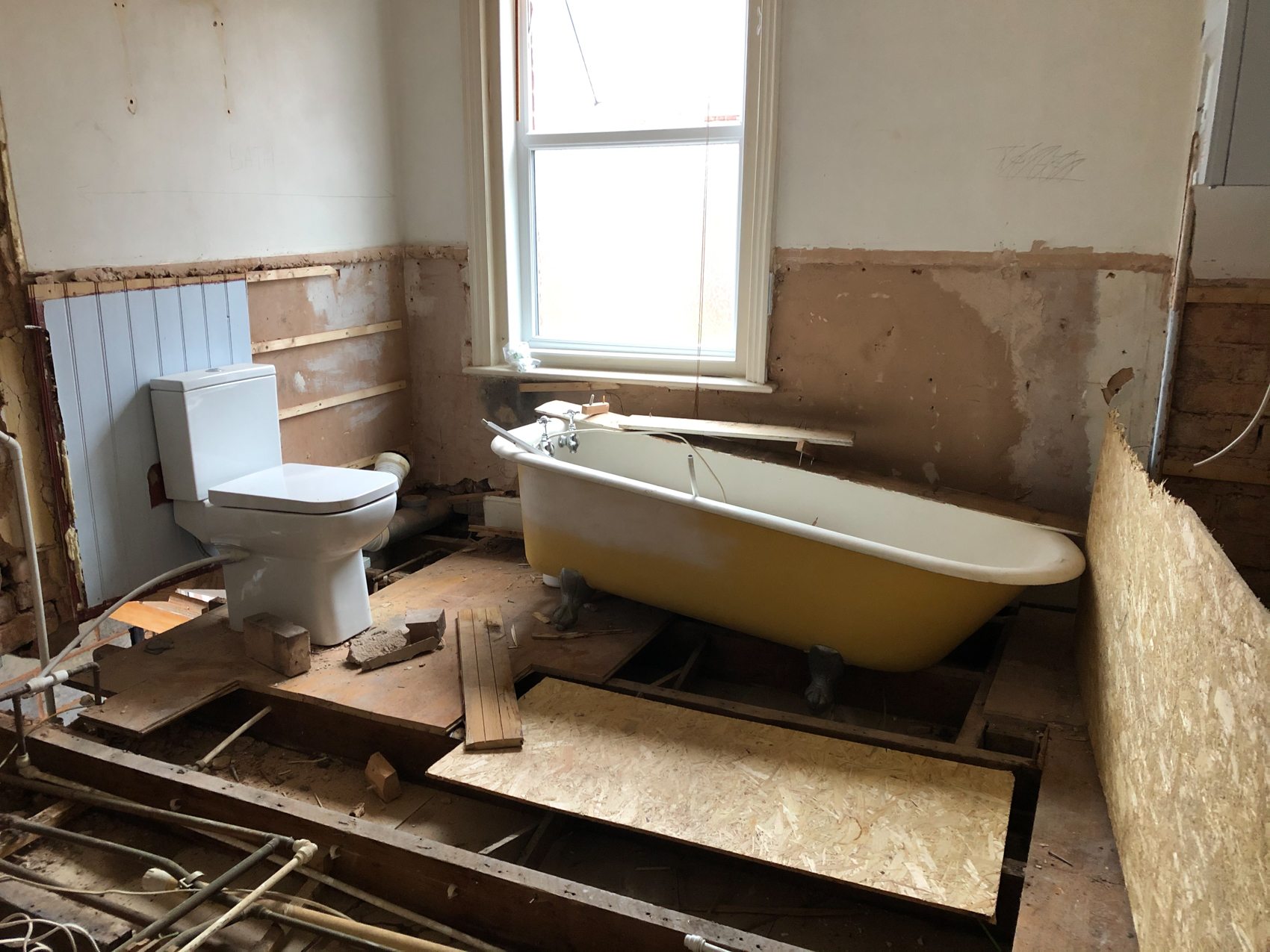 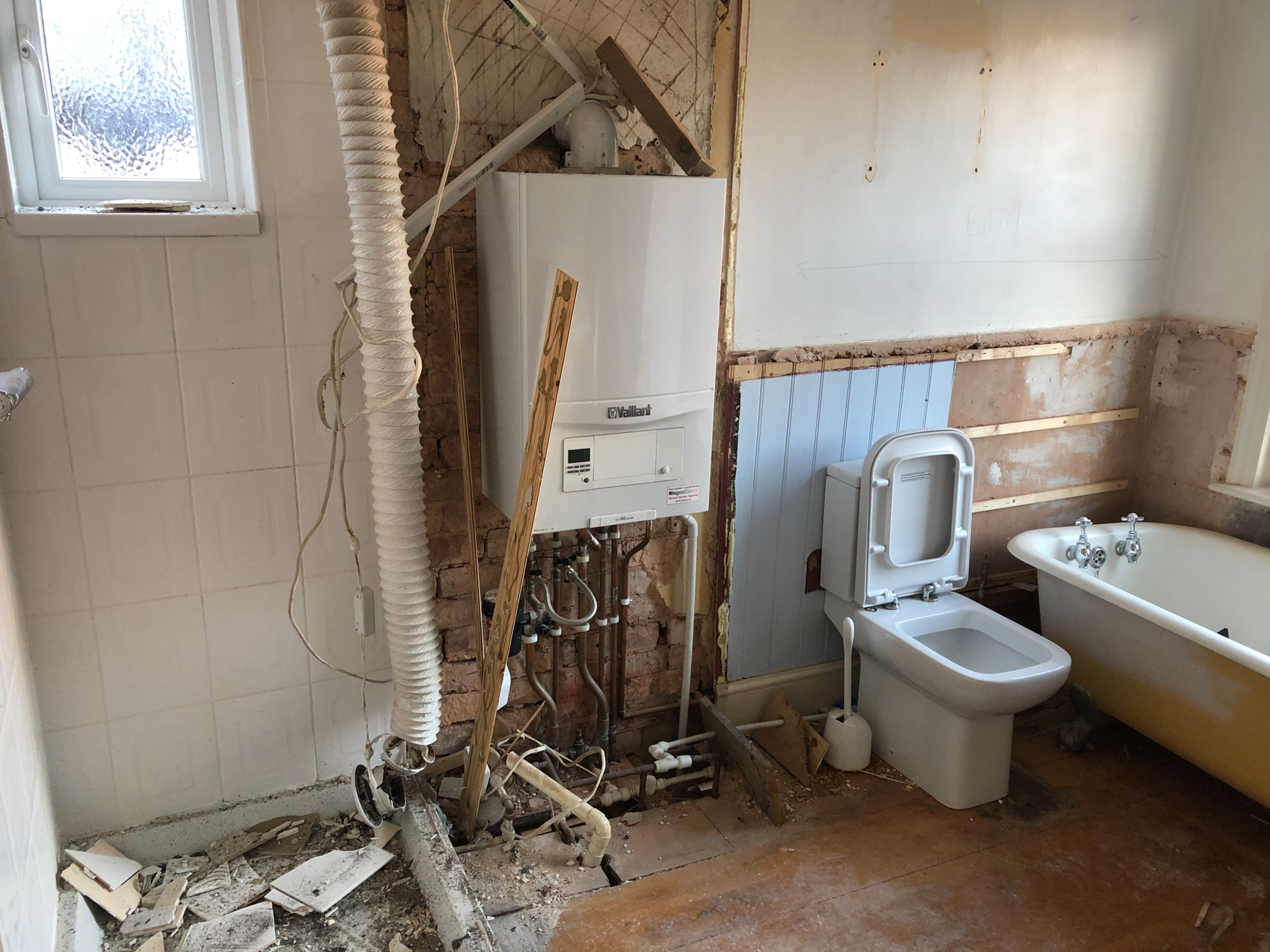 There were, as you can imagine, a lot of ups and downs during the work. I now understand why it is so stressful and time consuming to renovate, even if you don’t necessarily do all of the physical work yourself. The timing with the construction workers, but also between the other professionals, i.e. plumber, electrician, tiler, etc., as well as getting the materials in time, daily checks from us, what is done when in the house, was almost a full time job for us.

And here’s a little summary of our frustrations. If you can’t handle “first world problems”, then it would be best to scroll through here quickly 🙂 Sure it’s a luxury problem to have problems during construction. After all, you have to be able to afford renovation work in the first place. At the same time, it is a lot of money, whether saved or borrowed, which is why it was still a couple very stressful months.

I want to be fair, overall we were happy with the builders, they were super nice, hardworking, always available, always interested in a solution in the end and you could always talk to them eye to eye (because with the window company, for example, this was quite different…). But there were so many details that we were not satisfied with and 2-3 major things that unfortunately did not go well. There were communication problems among the individual teams, i.e. between plumber, tiler and construction workers, so that the completion of the renovation work in the bathroom was greatly delayed. For example, the underfloor heating was unfortunately also laid where the fitting for the bath tub tap should have been. In the end they found a solution, but we had to push quite hard for it and it just delayed everything a lot. But the biggest drama happened over Christmas/New Year: At that time we had no hot water and hardly any heating :/ This was due to a mistake by the plumber as well as communication difficulties in the construction company’s team.

But I will be fair and say that in the end a solution was always found and the construction workers were overall super nice. For 2-3 major problems, they found very good solutions. But in between I was really annoyed. We had paid for the management for the different builders, plumbers, tilers, etc., so that we did not have to personally take care of the coordination between the individual parties. Nevertheless, we were actually on site every day for the check and Jesse had to make a lot of phone calls. 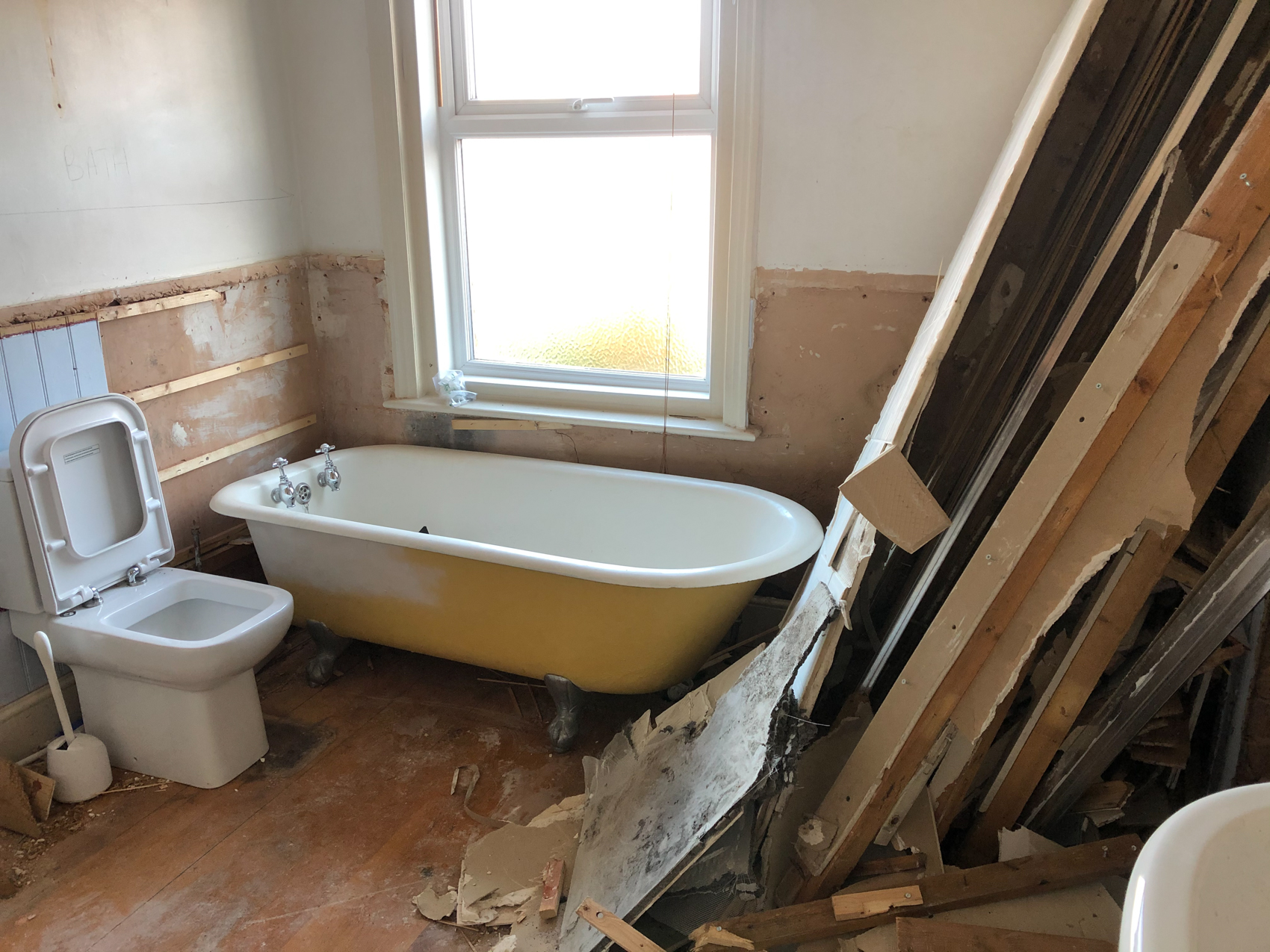 So my tip: Really try to always be on top of things, don’t hesitate to check up on the work every day. Don’t be shy about asking three times about every hole, every corner and every step. Yes, this may annoy the professionals, but if we had followed through with being the “annoying” customer, we would have saved money, time and stress. At one point, we were told that we didn’t know any better than the construction workers. But then something went wrong a few days later, and we were annoyed that we hadn’t been bugging them as we did before. In the end, we are the ones who spend a lot of money on the renovation, so we are “allowed” to ask ten times, in my opinion.

Have you ever done such a big renovation? What was your experience? At least I know it’s not country specific. Friends of mine are building in Germany and they had open pipes in the basement, for example, which then flooded everything. I guess every renovation or construction project comes with stories like these 😀

The next step was to finally re-enamel the bathtub. We had decided to keep the old tub and just have it restored. This was not cheap, about 400 pounds, but it was worth it, at least in my opinion. We also said goodbye to the yellow on the outside of the tub and opted for a light green. 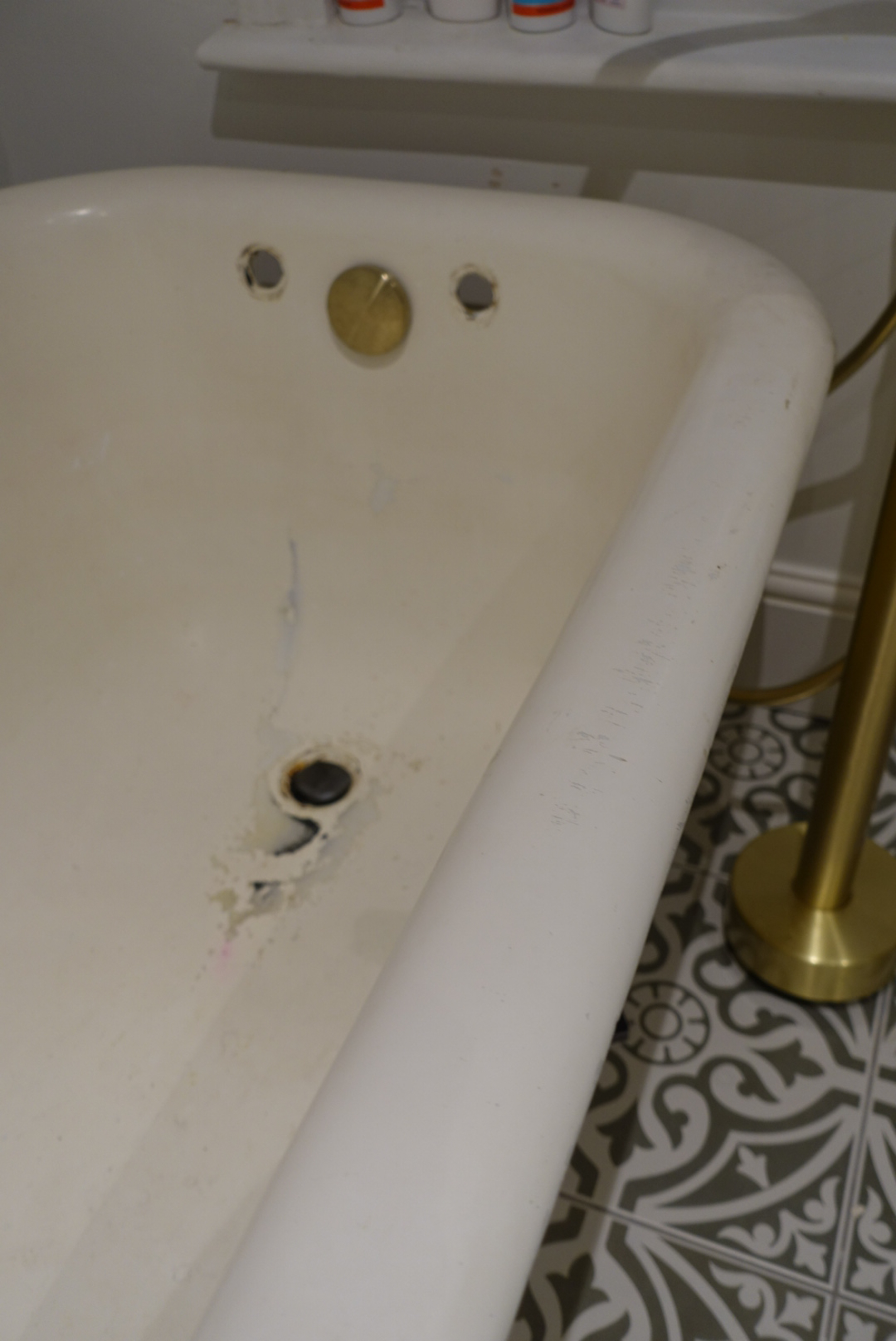 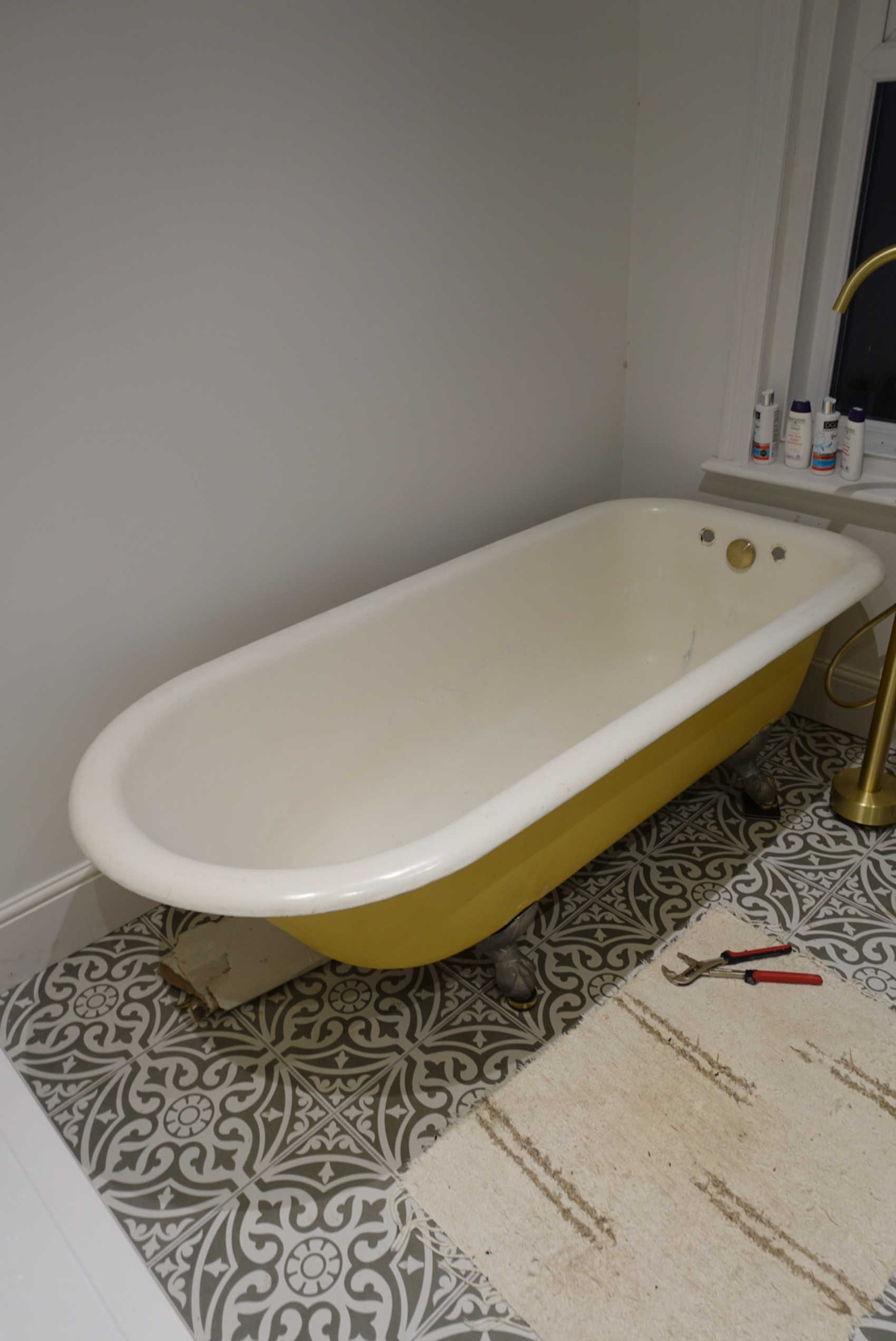 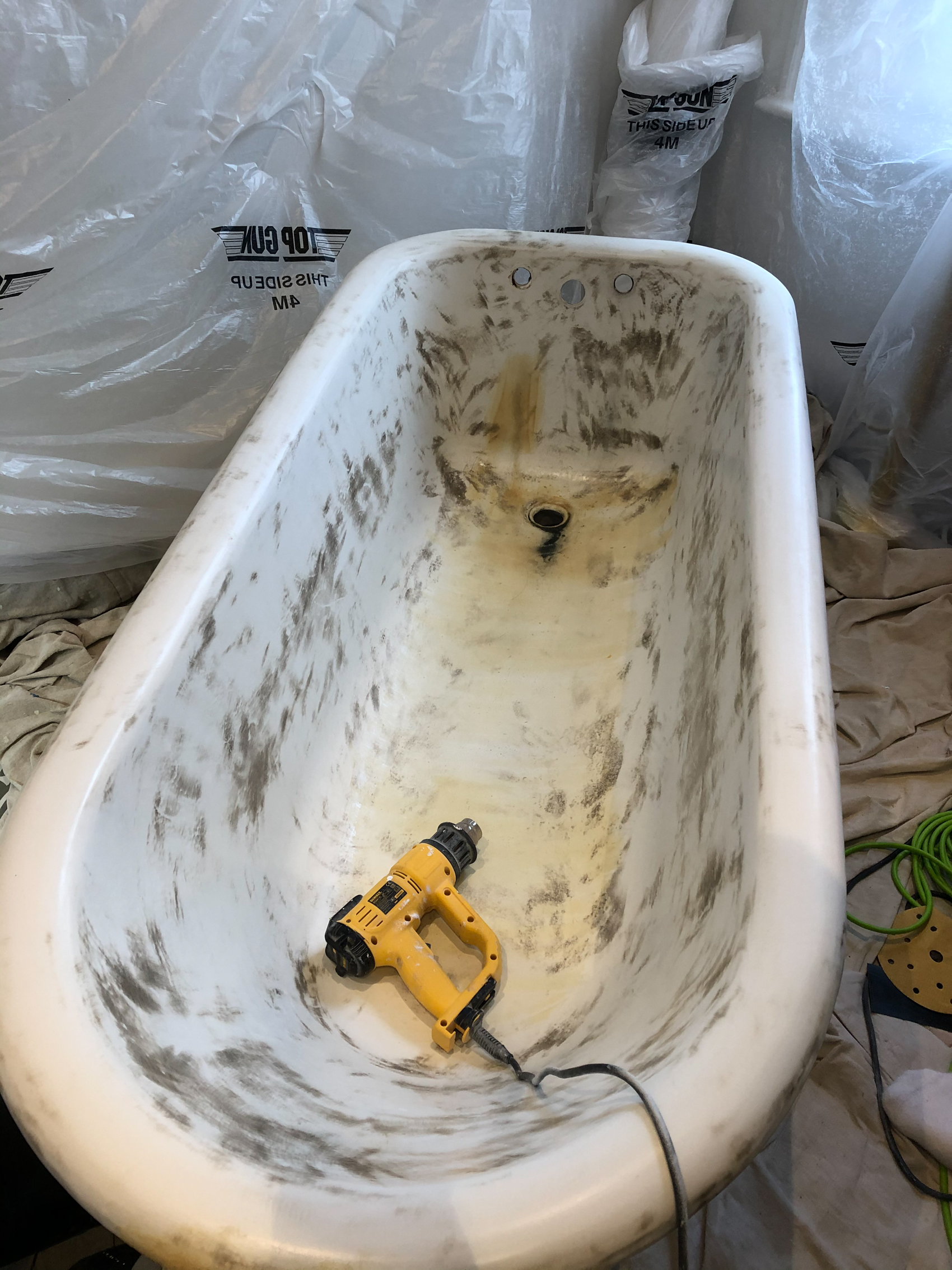 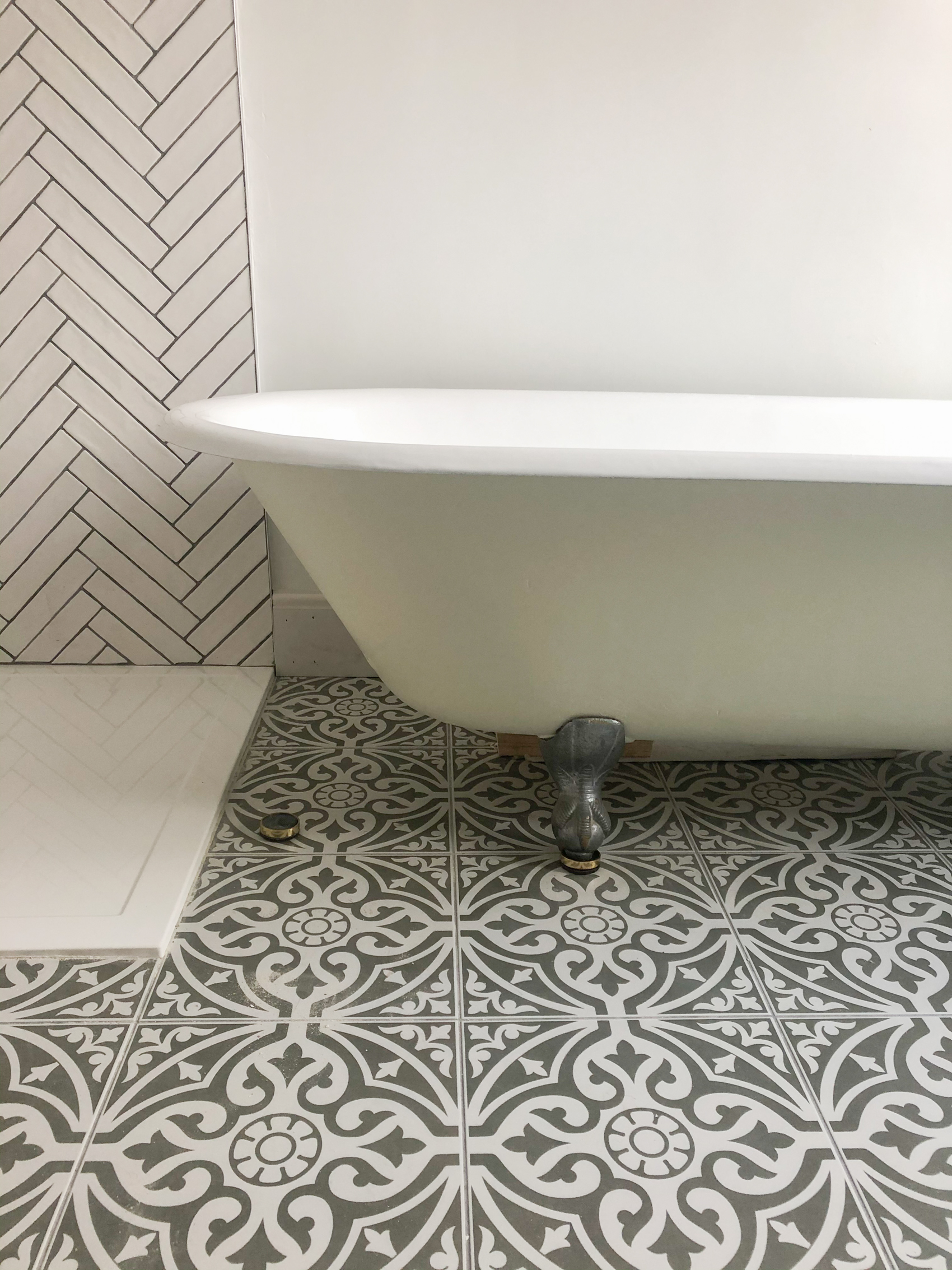 In January we were finally able to paint and “furnish” the new bathroom. For example, I have already made a blog post about our DIY vanity. Shortly thereafter, our shower enclosure was also installed. Before that, we either always had to take a bath, or take a shower sitting in the bathtub.

I also have two videos on all the makeovers: 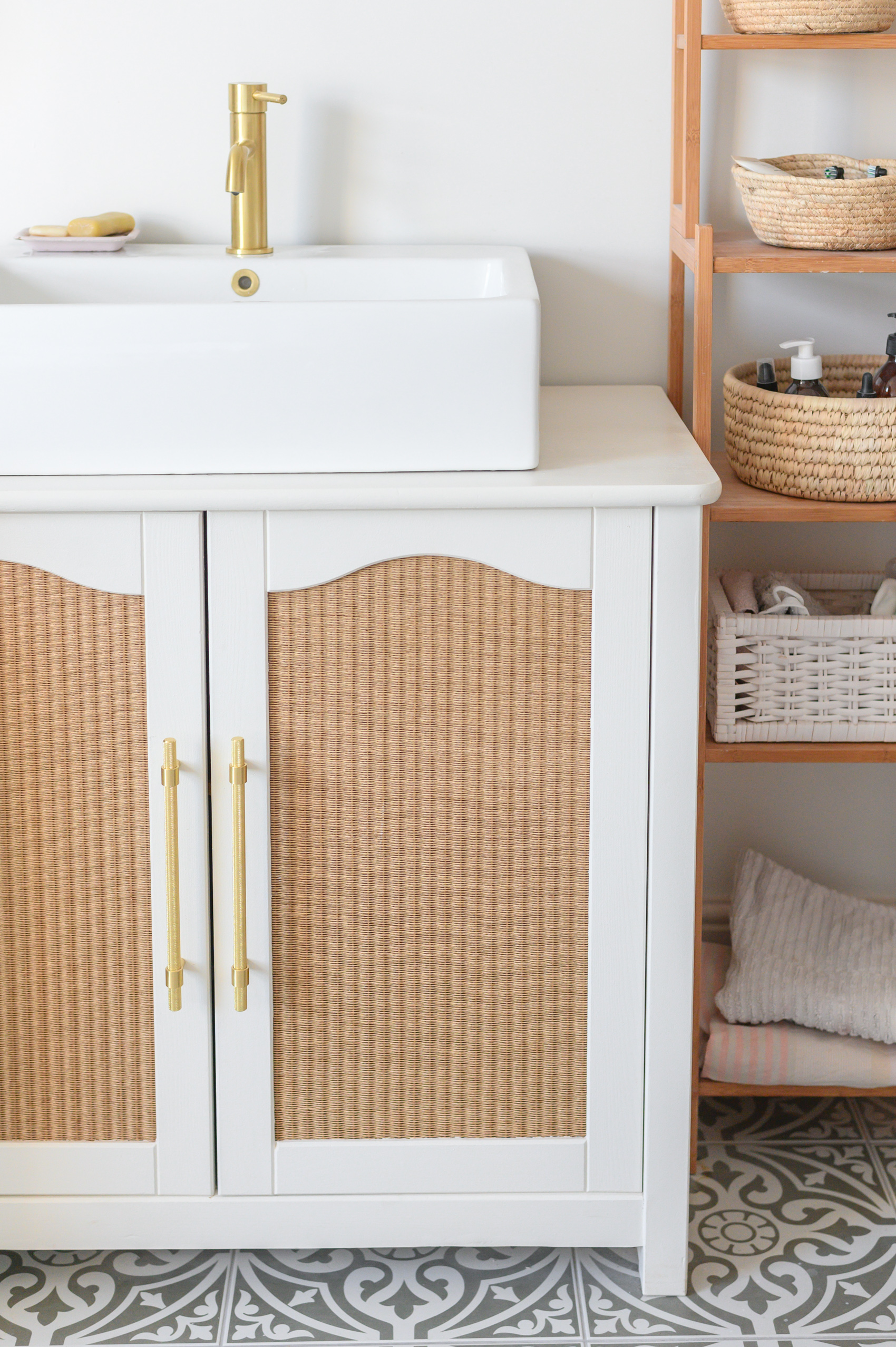 After that we had to finish a few more things, e.g. add a mirror, a lamp and a few more details. So the bathroom was finally “finished” in mid-February – well, at least almost 🙂 Still missing are the wall tiles at the sink. We want to do that ourselves and just haven’t gotten around to it yet. 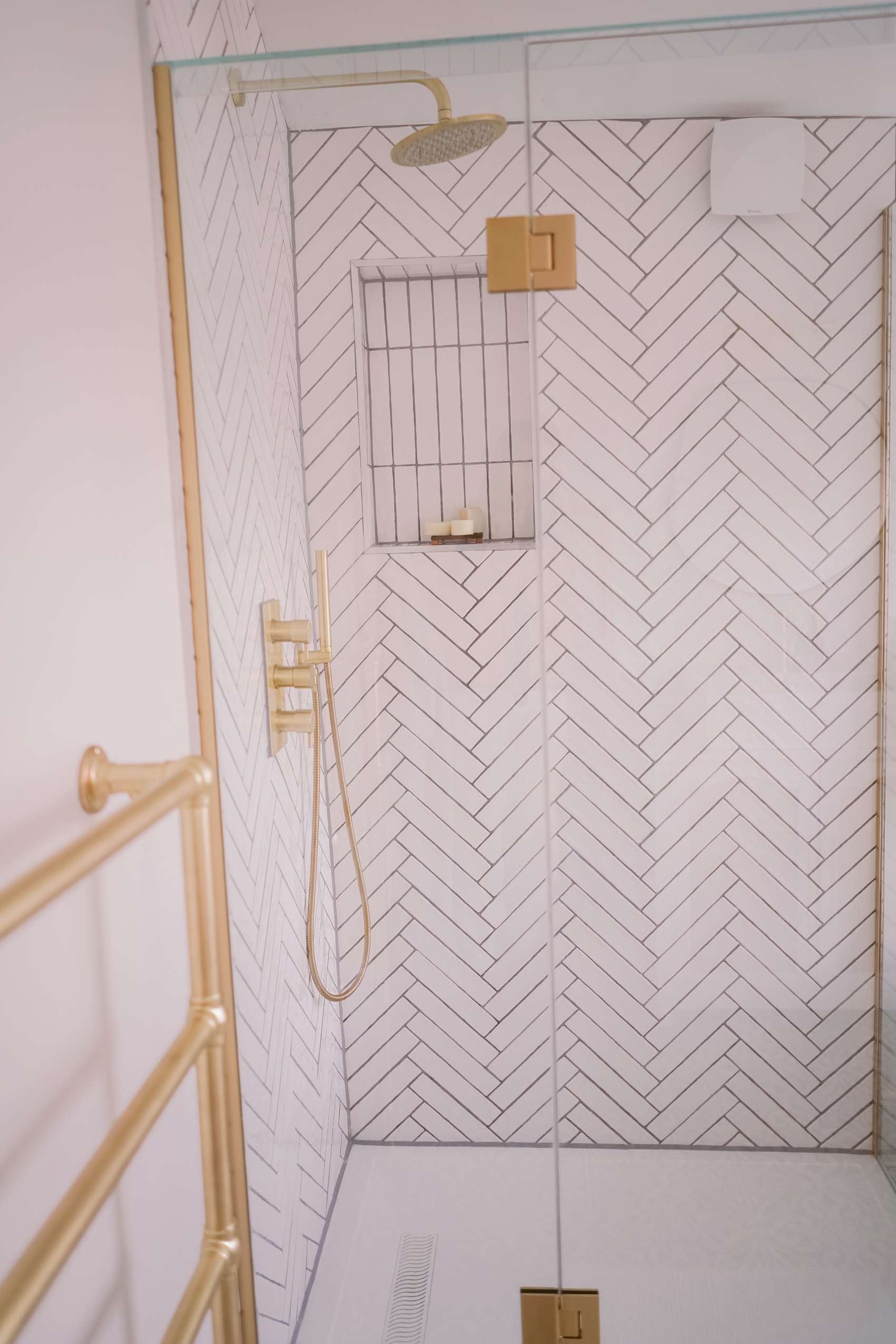 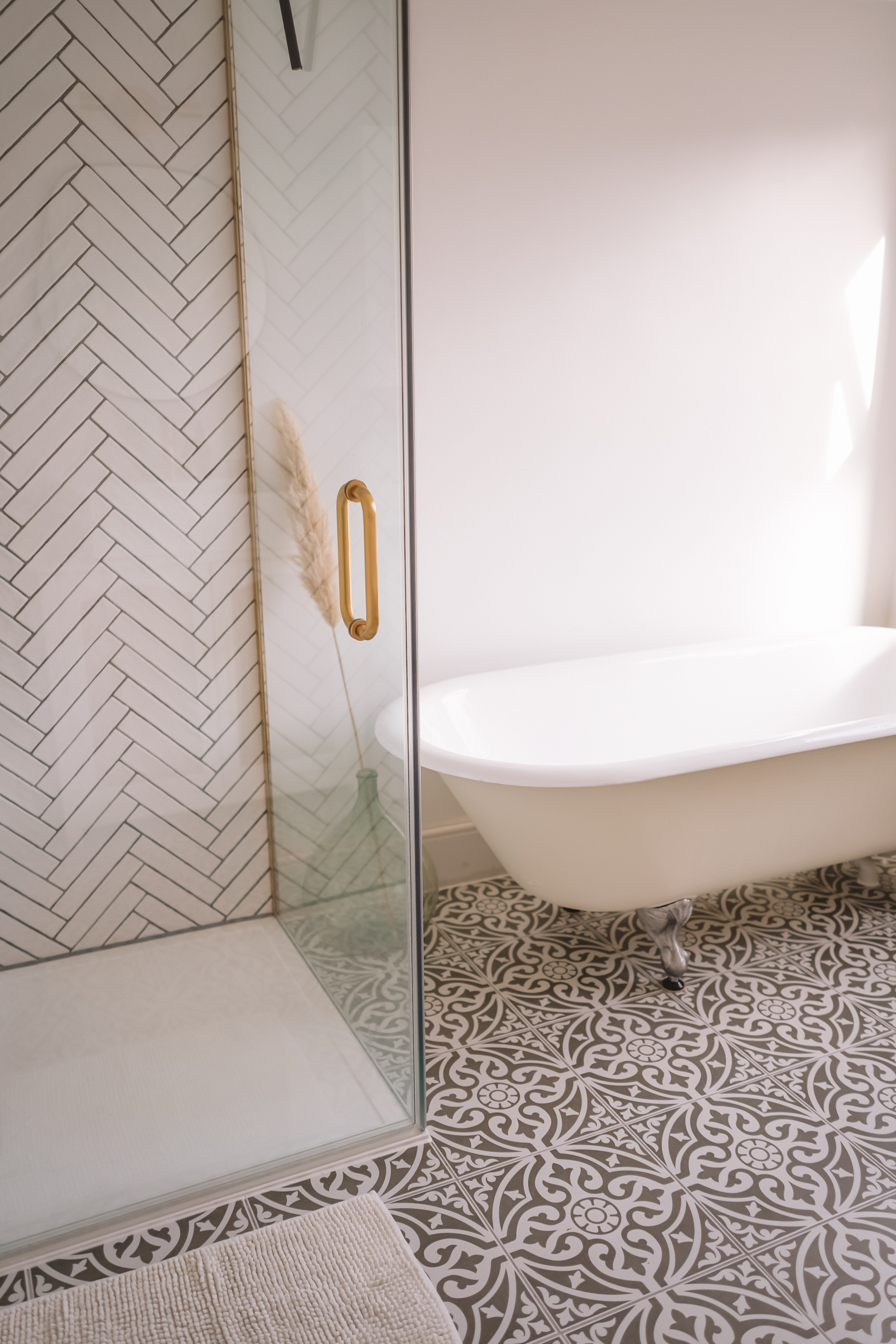 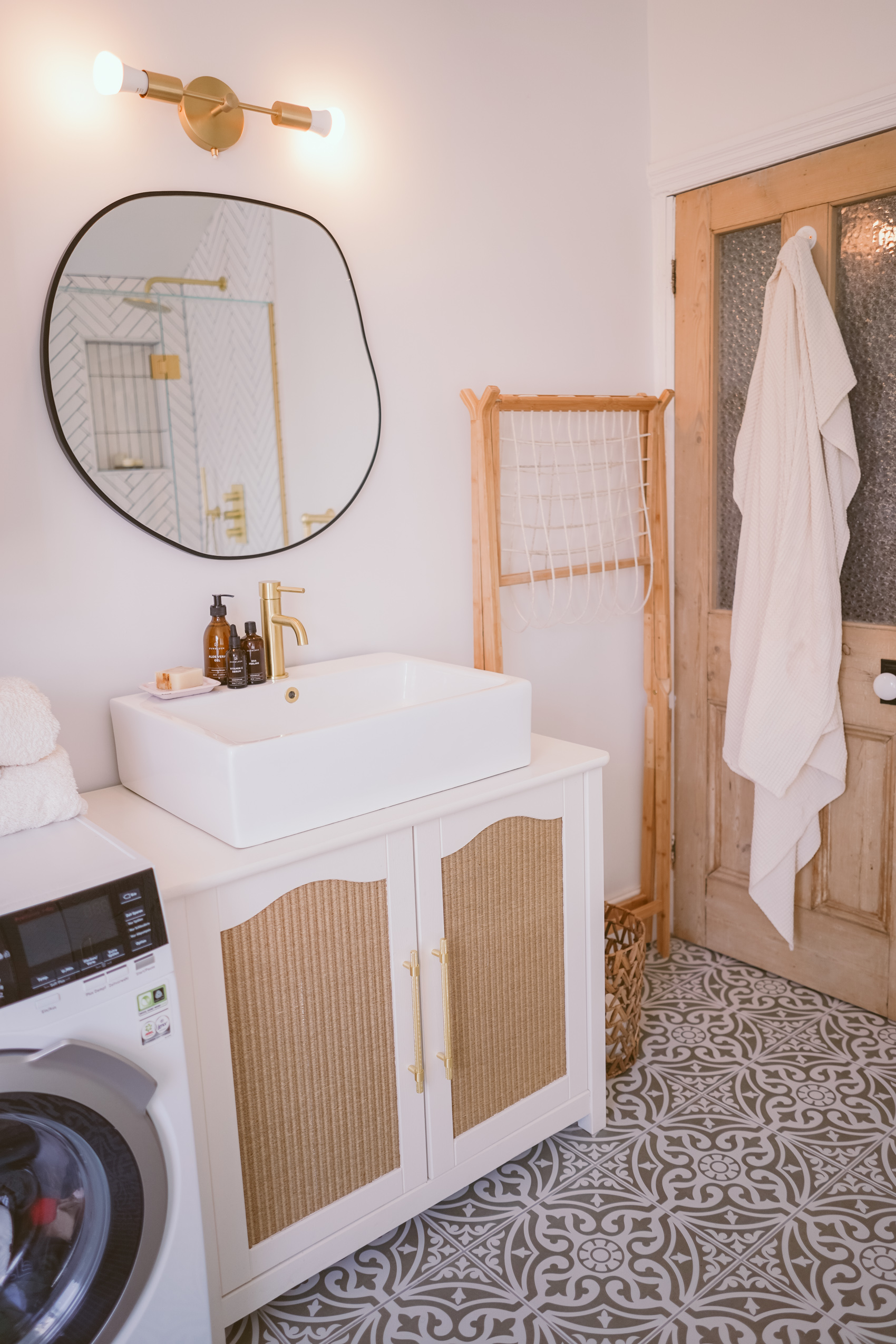 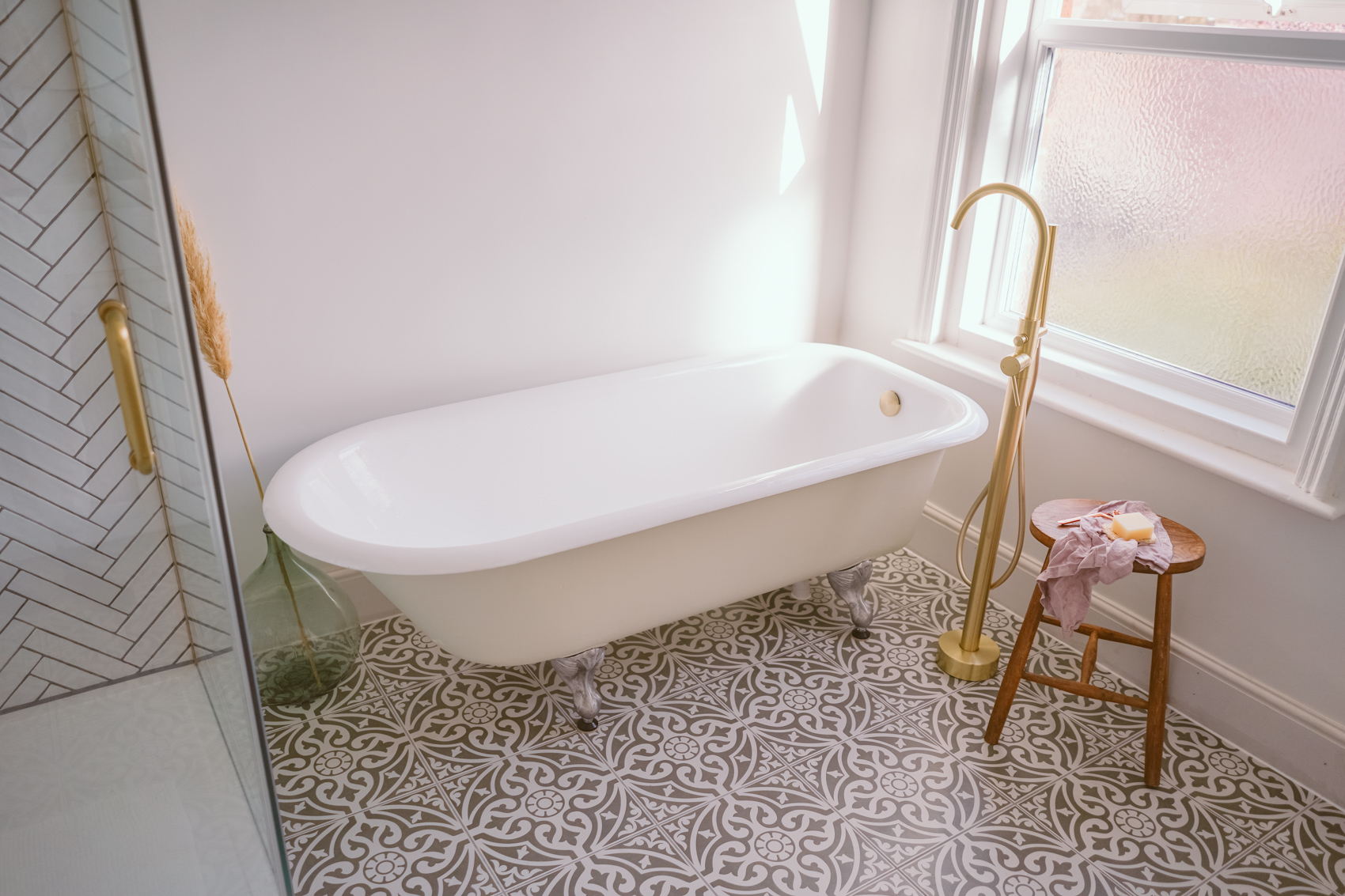 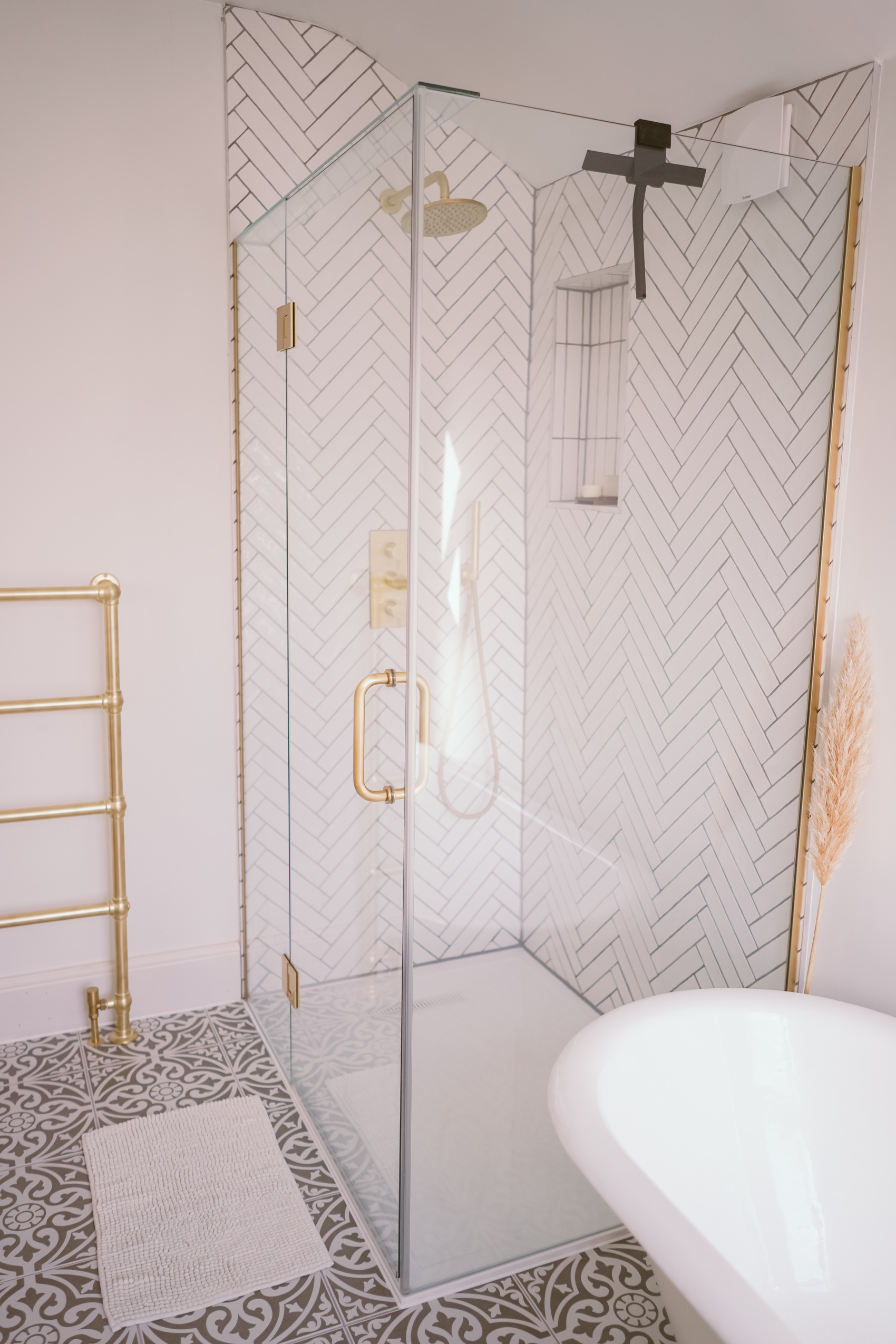 Next on our agenda was to give the room some more decor and coziness. We needed some shelves for storage and wanted to add some plants to the room:

So in the video you can see how the bathroom looks now. There are still 2-3 to-dos on our list, two of which are relatively large, and we will hopefully get that done in the next few weeks. 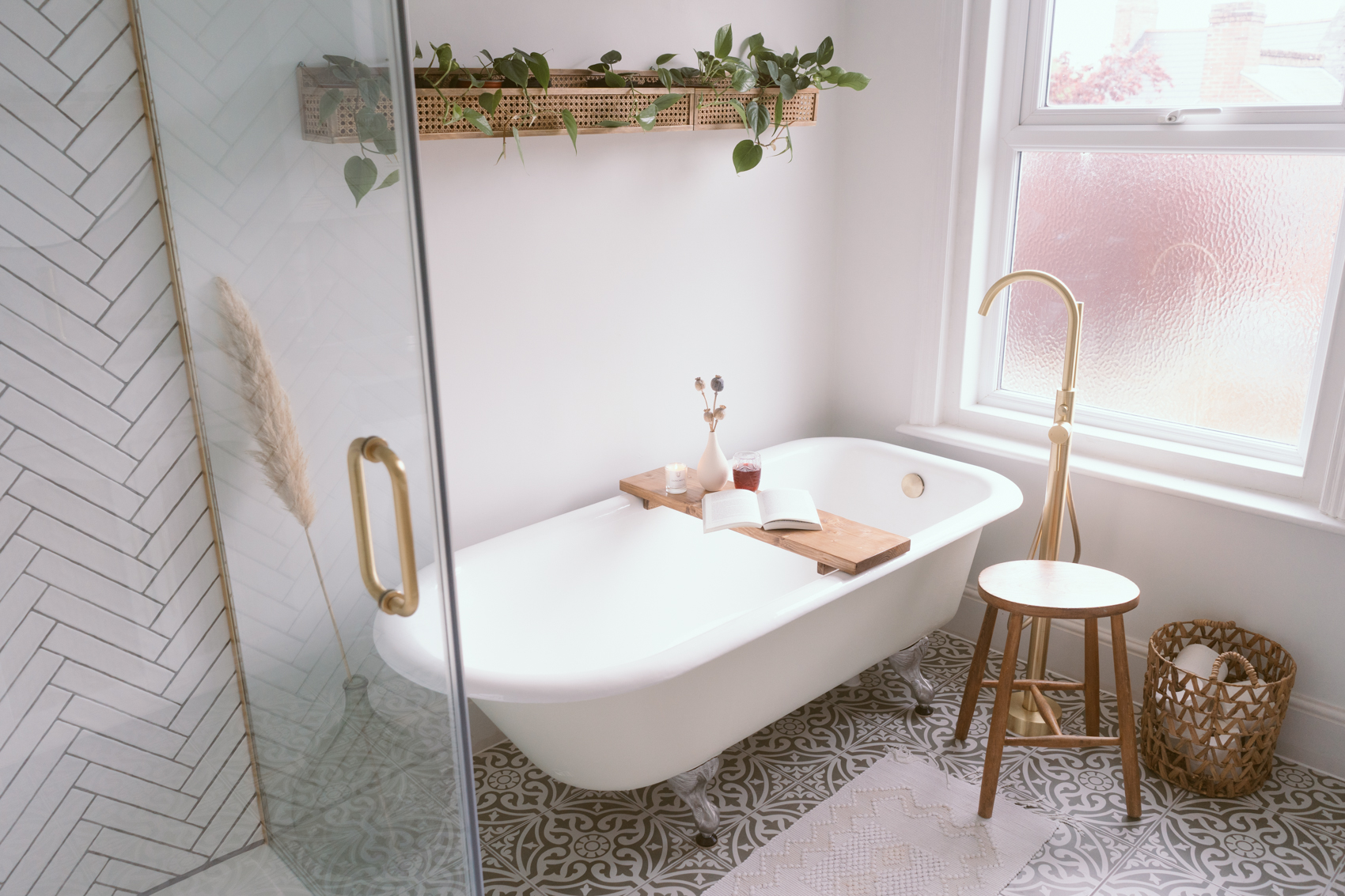 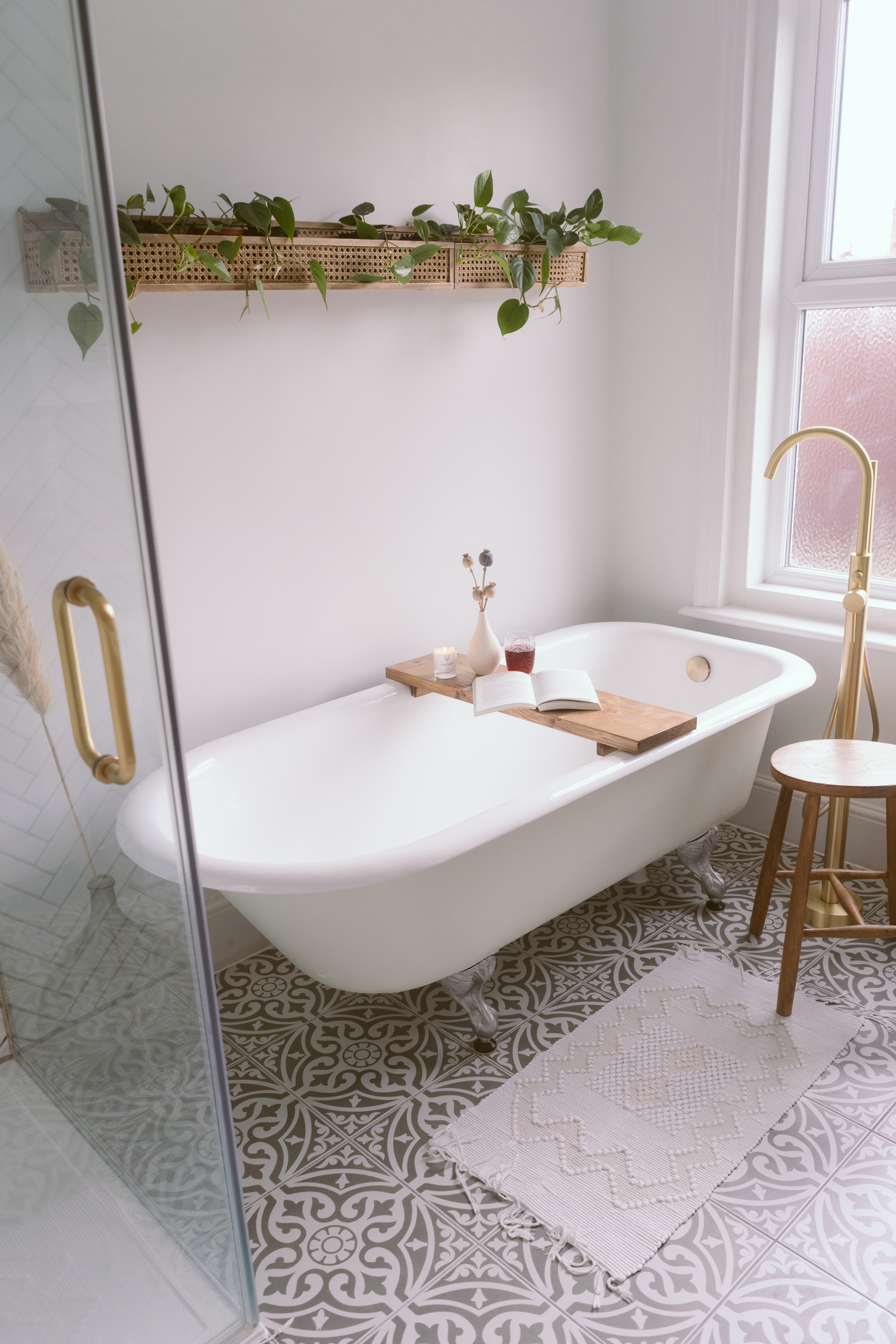 Have you guys gone through a renovation before? How did it go for you guys, especially in the bathroom? If you live in a rental, have you spruced up your bathroom in a renter-friendly way? 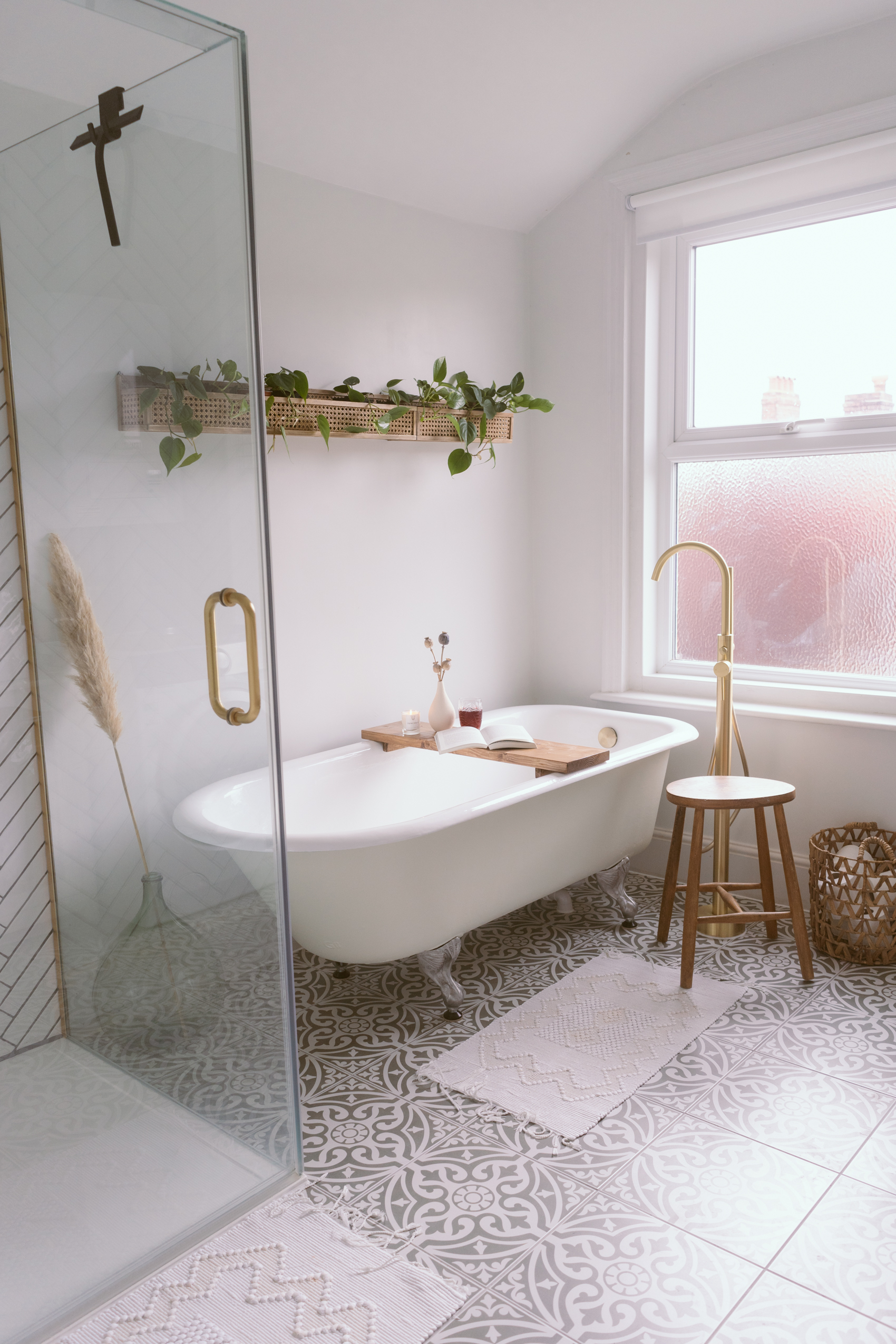 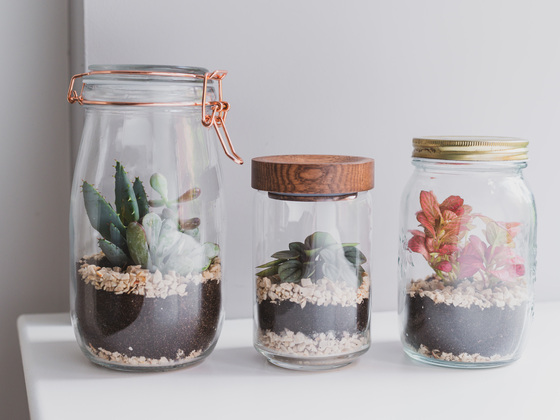 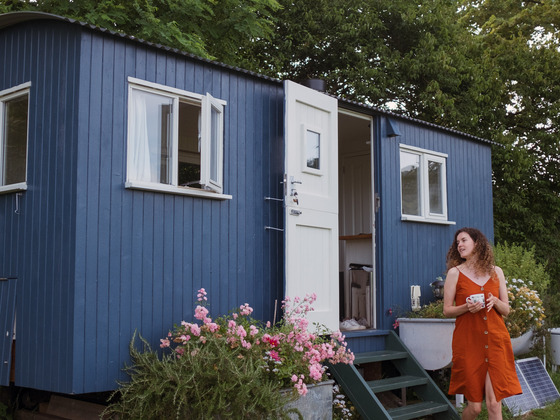 Relaxing cottages in nature – tips for a sustainable vacation in Europe 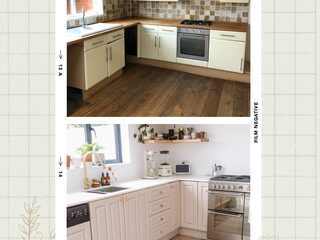 Kitchen Renovation: what we had done + costs 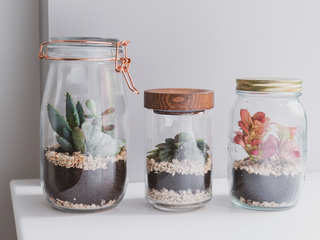 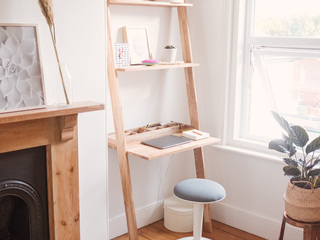 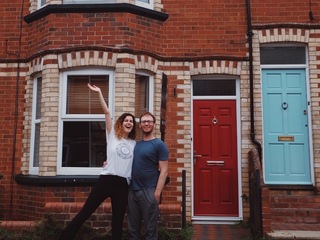 We bought a house in England!