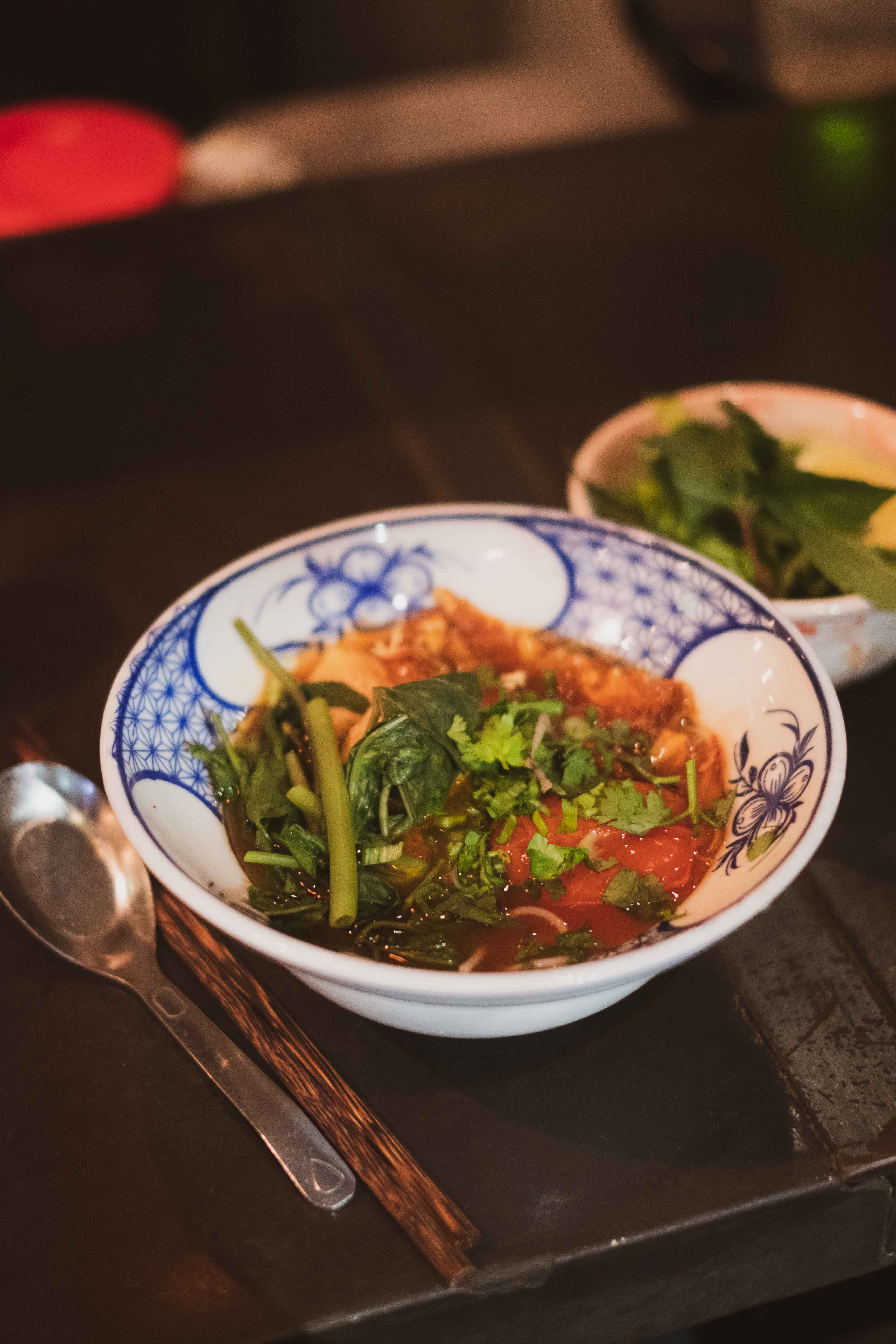 One of Jesse’s best friends opened a top restaurant in Manhattan, NY about two years ago – that was clearly on top of our to-do list on our trip to the United States! But to understand what makes the place and our experience there so special, it takes a short backstory.

Disclaimer: Please do not immediately click on the Hanoi House Menu before reading this. Because at first glance the place does not seem to be very vegan-friendly. But that is far from true! You’ll see what I mean soon. In addition, this post is not sponsored, the restaurant is simply owned by really good friends of ours and clearly I am happy to do (unpaid) advertising for it!

Ben and Sara, the founders of Hanoi House, were the couple that inspired Jesse and I to do a world trip! Almost six years ago, they were almost at the end of their journey when they stopped in Berlin to explore the city and visit us. Jesse grew up with Ben in the same neighborhood and their mothers are very good friends!

So Ben and Sara stayed with us in Berlin and somehow we managed to persuade them to change their flights and instead of staying 3 nights they stayed almost a full week with us. We just had so much fun together. Jesse and I were relatively new to the city ourselves, so we all explored the capital together. The two of them told us so much about their backpacking trip: their adventures, the different countries and customs, the great food in Southeast Asia, the people they met – they had countless stories! Among other things, I was fascinated by how incredibly minimalistic the two lived for 7 months with relatively small backpacks. Shortly afterwards Jesse and I decided: we want to do something like that! And so our 3-year savings phase started for our own world trip!

Back to the restaurant: During the 7 days in Berlin, Ben and Sara also told us that their big dream became even clearer during the journey: opening their own restaurant in New York. They worked in the US restaurant business for a long time and it was just so nice to see them “dreaming”!

Almost two years ago, Ben & Sara’s Restaurant Hanoi House opened! We knew that we had to check it out during our next family visit to the US and this week we finally had the chance!

Yes, the menu and the focus are more on meat and fish dishes and Jesse and I were very skeptical about the vegan choices (Jesse is vegetarian). Only a few specific vegetarian dishes are on the menu and vegan is not indicated at all. The kitchen knew beforehand that we eat vegan and that was no problem at all. I then asked Ben again and he said you do not even have to give notice before coming if you are vegan. There are many “hidden dishes” that are vegan or can be veganized. I can hardly explain to you how delicious this all was, but I’ll try: 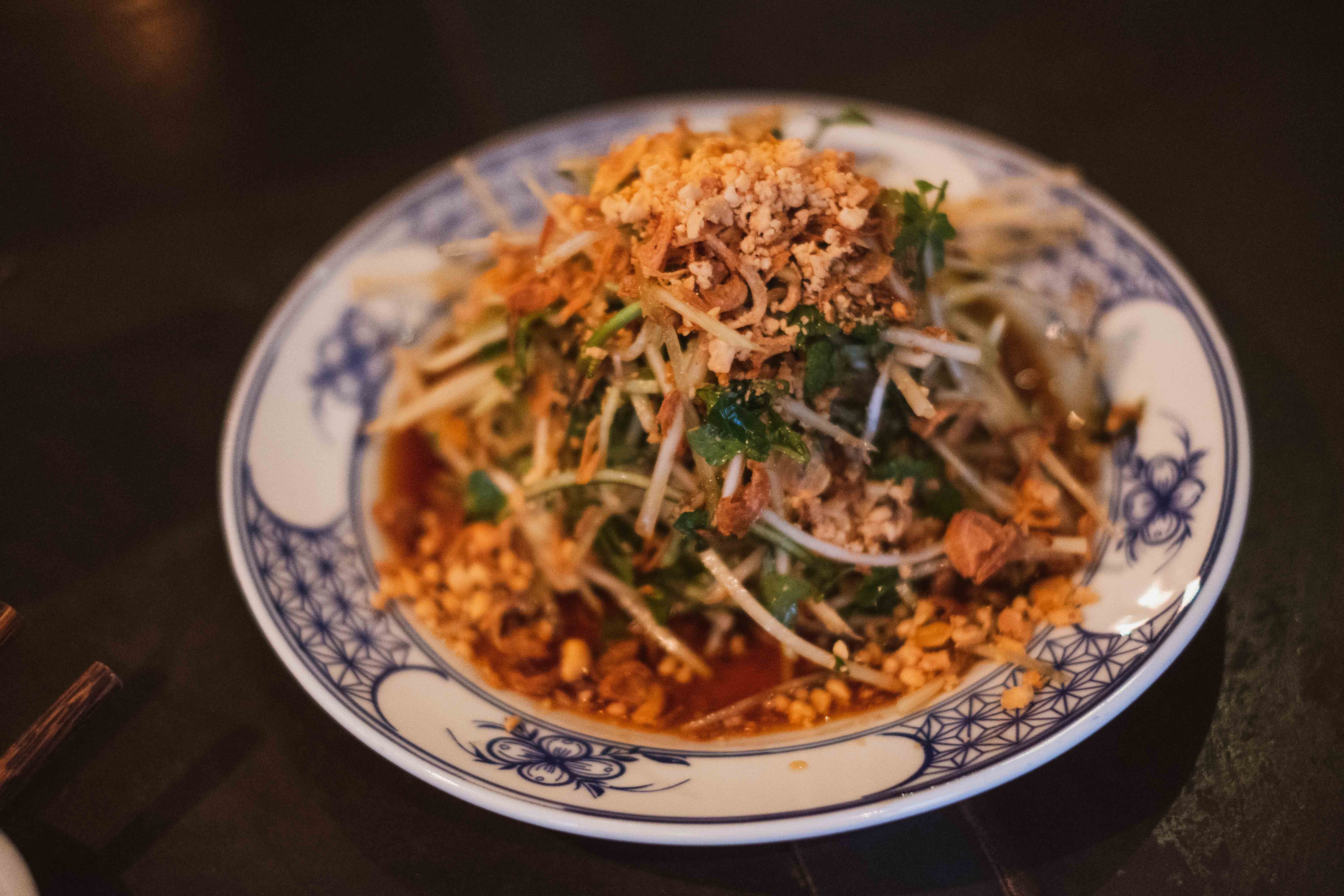 Spicy papaya salad with peanuts, sweet soy sauce and crispy shallots: I had to come to New York to fall in love! I’m actually not a big fan of papaya salad. Even in Thailand I wasn’t convinced by it. But I could have died in Hanoi House! The combination of crispy salad, sweet sauce, peanuts and roasted shallots was just heaven and we had to control ourselves, not to lick the plate, haha! Jesse and I shared this yummy salad! 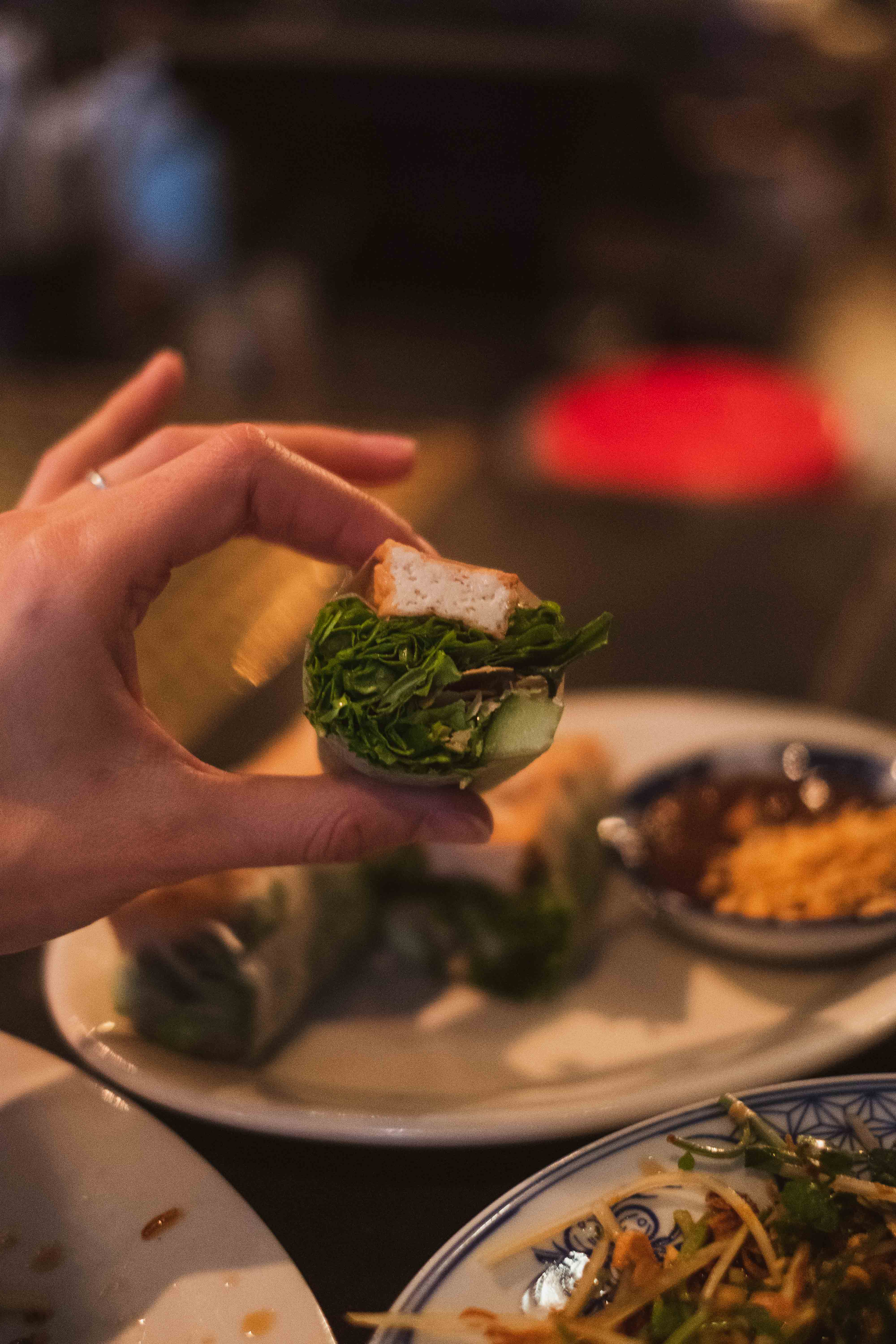 Summer Rolls with Fried Tofu and crispy Wonton and Peanut Hoisin Sauce: Actually the same story – I’m, hold on – not a summer roll fan! They always taste too “healthy”, too raw, too boring. No matter if there is a good sauce or not. These had a very interesting consistency due to the crispy Wontons and the delicious tofu in the middle!  They also contained mint, Thai basil, cucumber and peanut Hoisin sauce and I can never eat “normal” summer rolls again! I also told Ben that he spoiled my taste for summer rolls because I only want to eat his food from Hanoi House! Haha 🙂 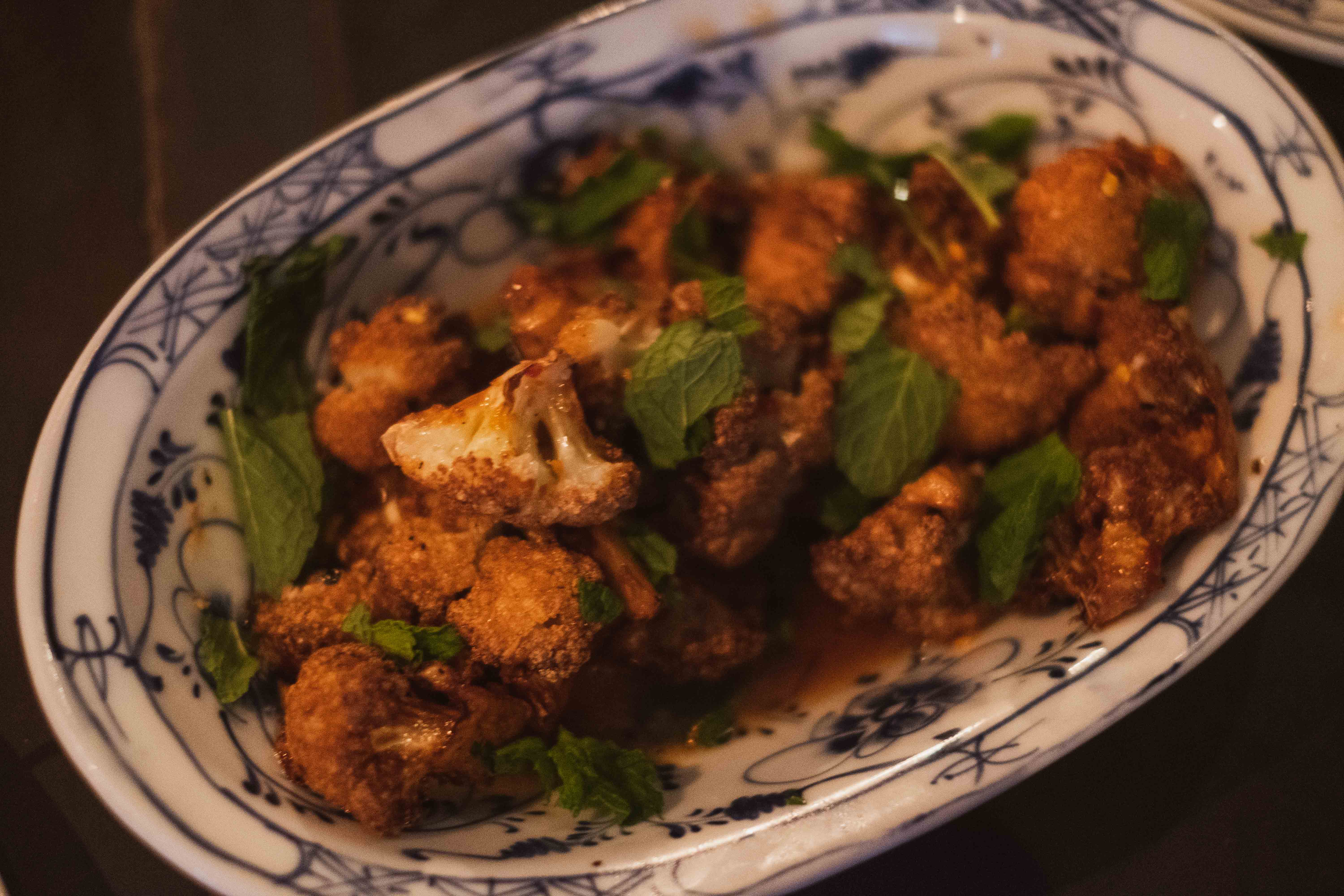 Spicy Garlic Cauliflower: I think most vegans know how incredibly versatile cauliflower can be, and Hanoi House proves it too: the cauliflower in the vegan version is flavored with mint, garlic, chilli and a sort of vegan fish sauce made from fermented soybeans. Believe me, vegan fish sauce is SO delicious! In my opinion, much better than the “real” fish sauce 😛 The plate was empty very quickly! Jesse and I shared it again. 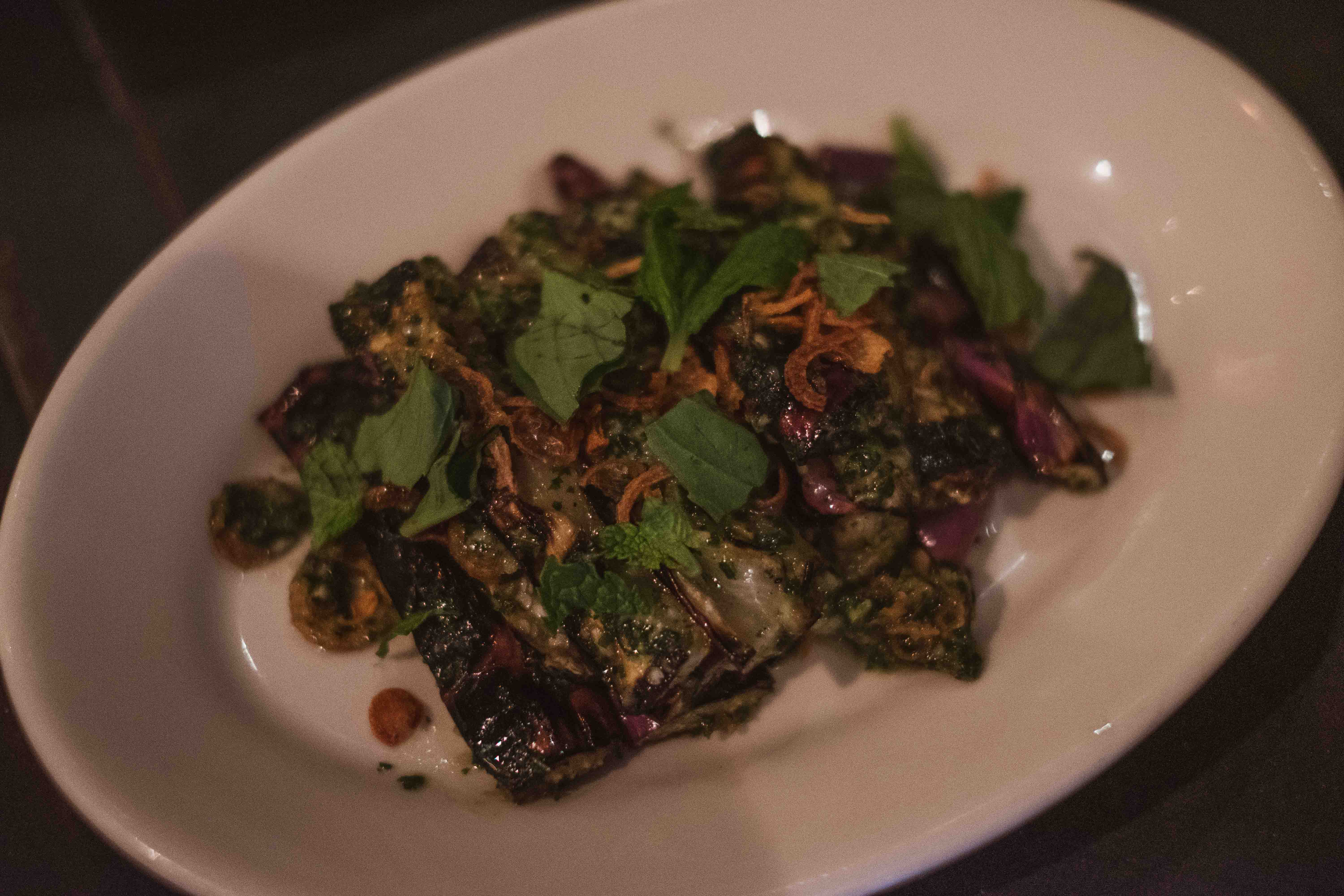 Here we come to a dish that is currently not on the menu: Japanese aubergines with fried shallots. This dish is currently being tested by the chef and Jesse and I were allowed to test the vegan variety. Whoever likes a slightly smoky taste, this is definitely the right dish for you. I think the Japanese aubergines have a stronger and sweeter taste than the standard eggplant, which fits in perfectly with the light smokey flavor of the dish! The shallots were again delicious and I could not get enough of them! 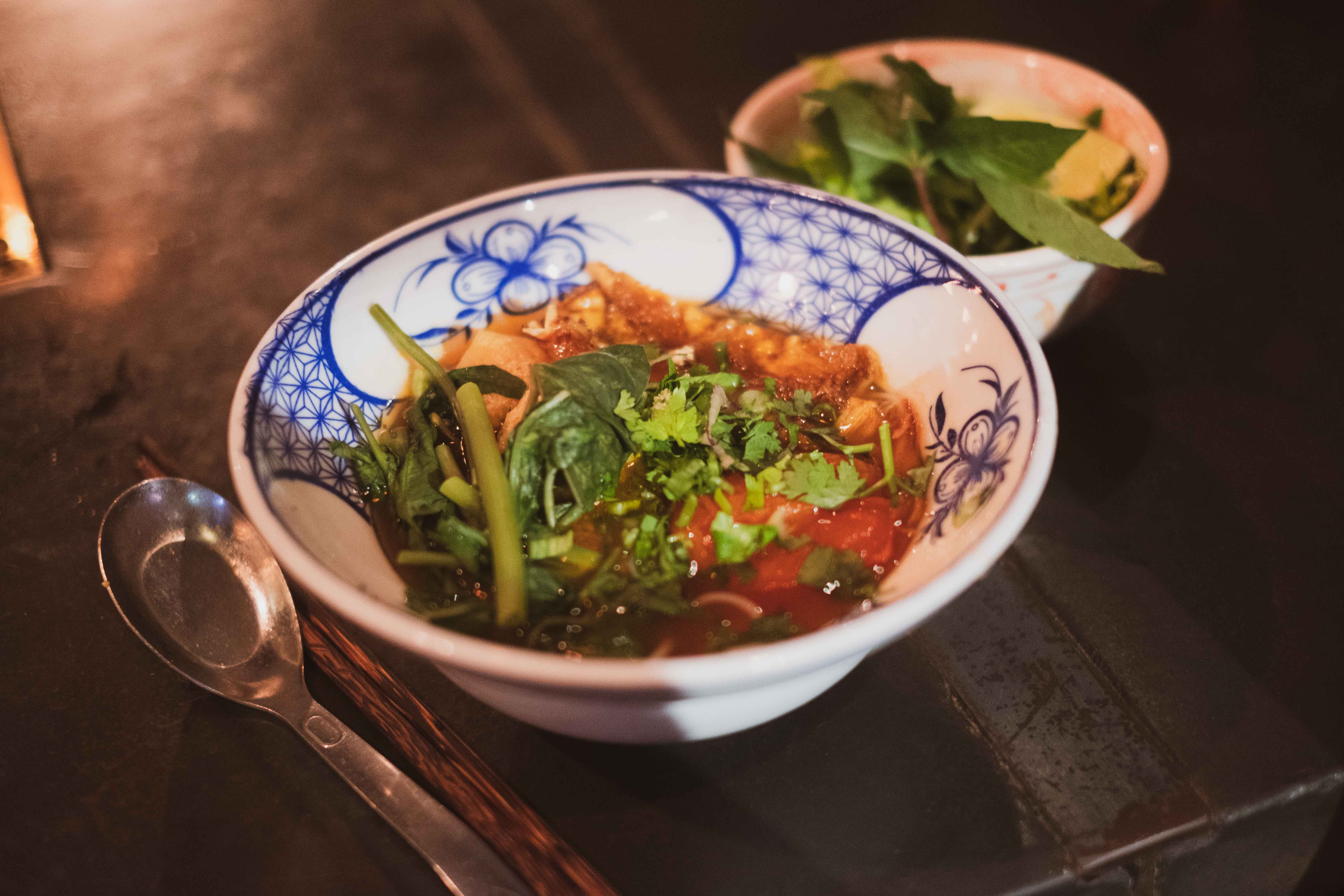 Tomato and tofu soup: Jesse and I were already quite full after the starters and side dishes, but when we saw (and smelled) the soup we suddenly had a lot of room in our stomachs!!! As the name suggests, the broth is a strong tomato broth with puffed tofu, fresh tomatoes, Thai basil and our absolute highlight: Yuba-pistachio-dumpling!!! Yuba does not sound so delicious at first, but it was truly divine: Yuba is tofu skin made from cooked soy milk and is actually a protein-rich specialty from Japanese cuisine. As I said, Tofu skin does not sound so cool, but I saved a piece of it until the very end, until the last spoon because it was so delicious! Jesse and I each had a soup.

But Ben was not finished yet with surprises and highlights: the soup was also accompanied by fried dough sticks (?? I do not know how I can describe it better), which are crispy, hot and greasy (in the best way!!! ) and perfect for dipping into the soup – SO GOOD! 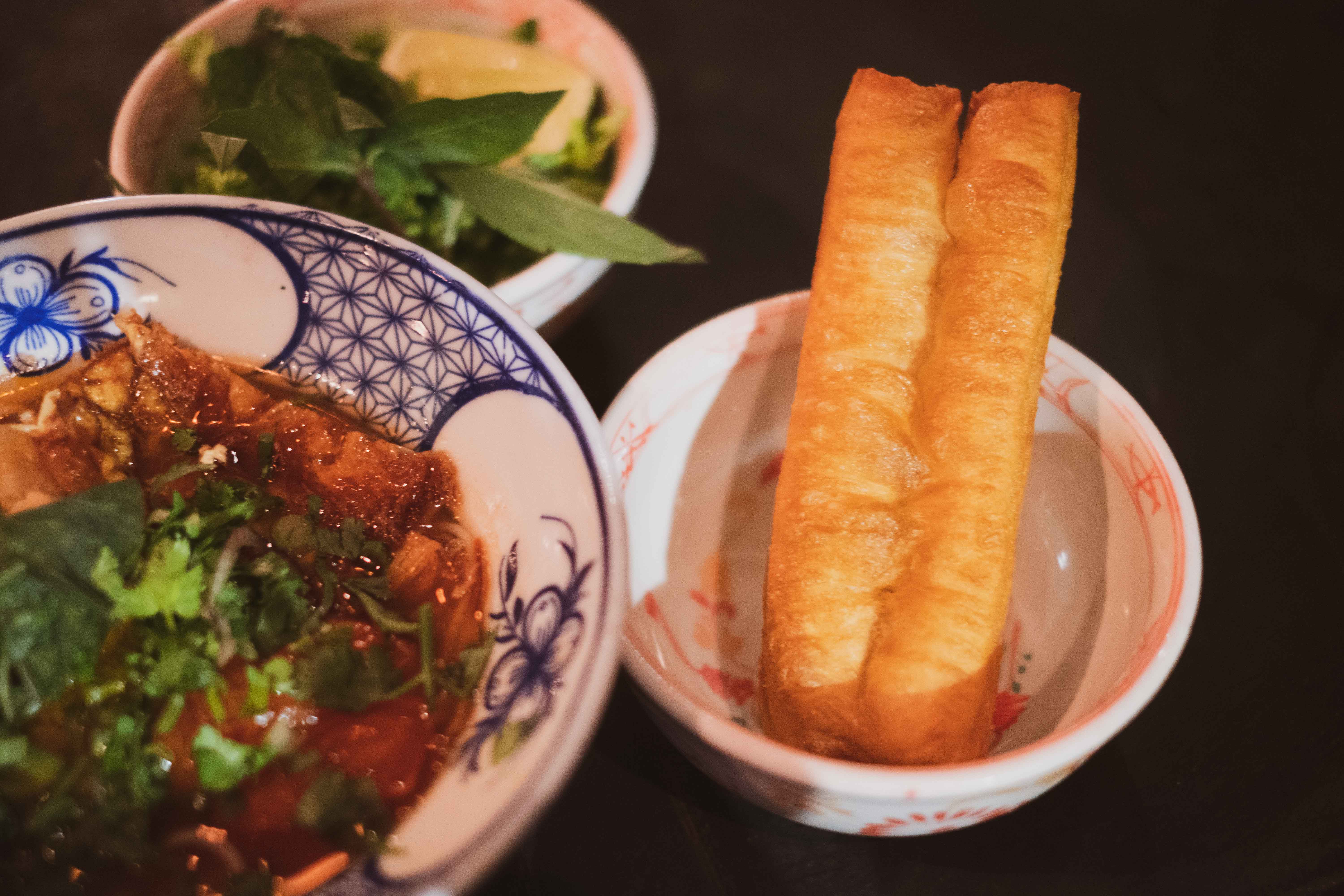 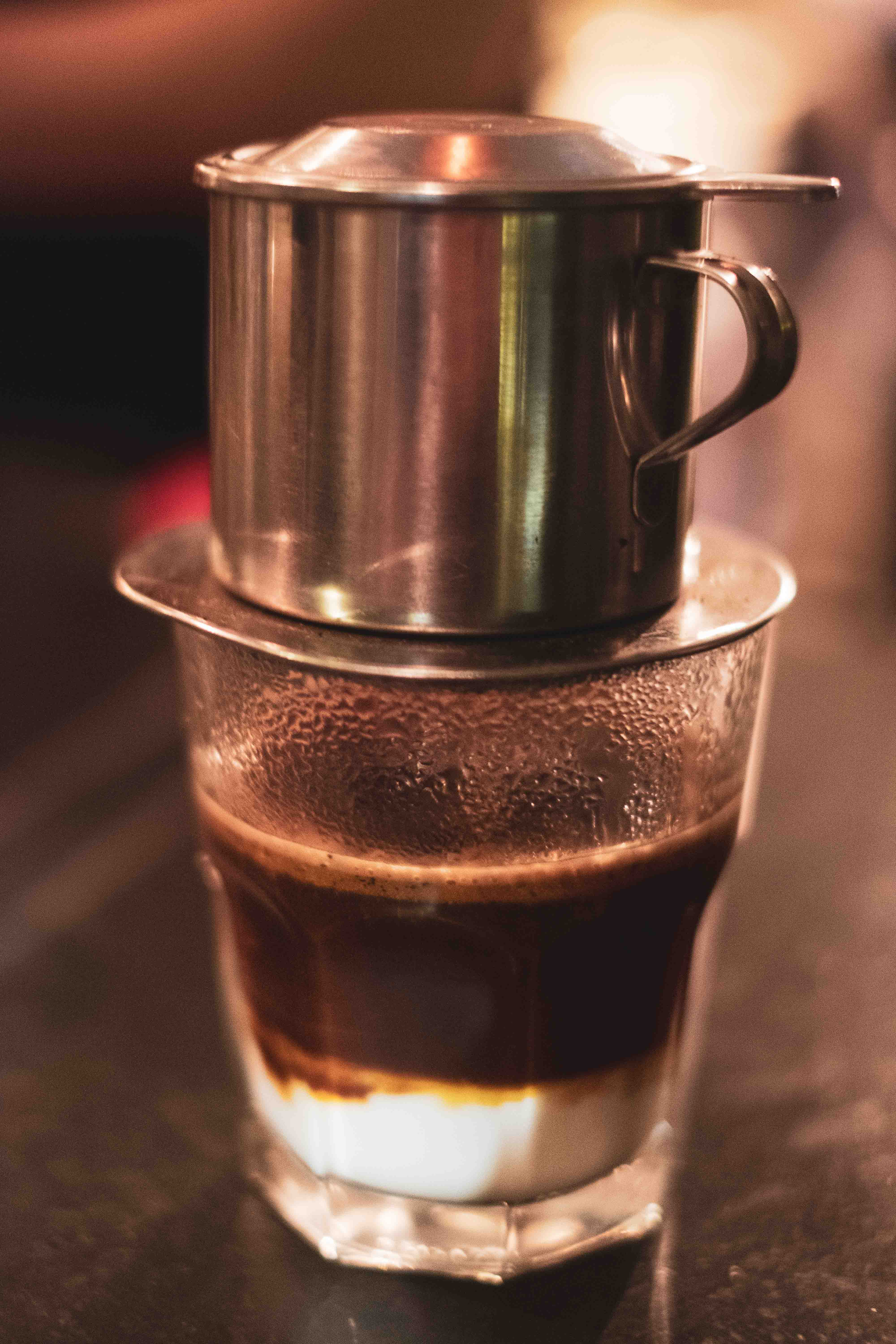 Of course, Vietnamese coffee is also available at Hanoi House. For Jesse with condensed milk and for me with coconut cream. Honestly, I enjoyed my vegan version even more, but I think that’s a matter of taste! 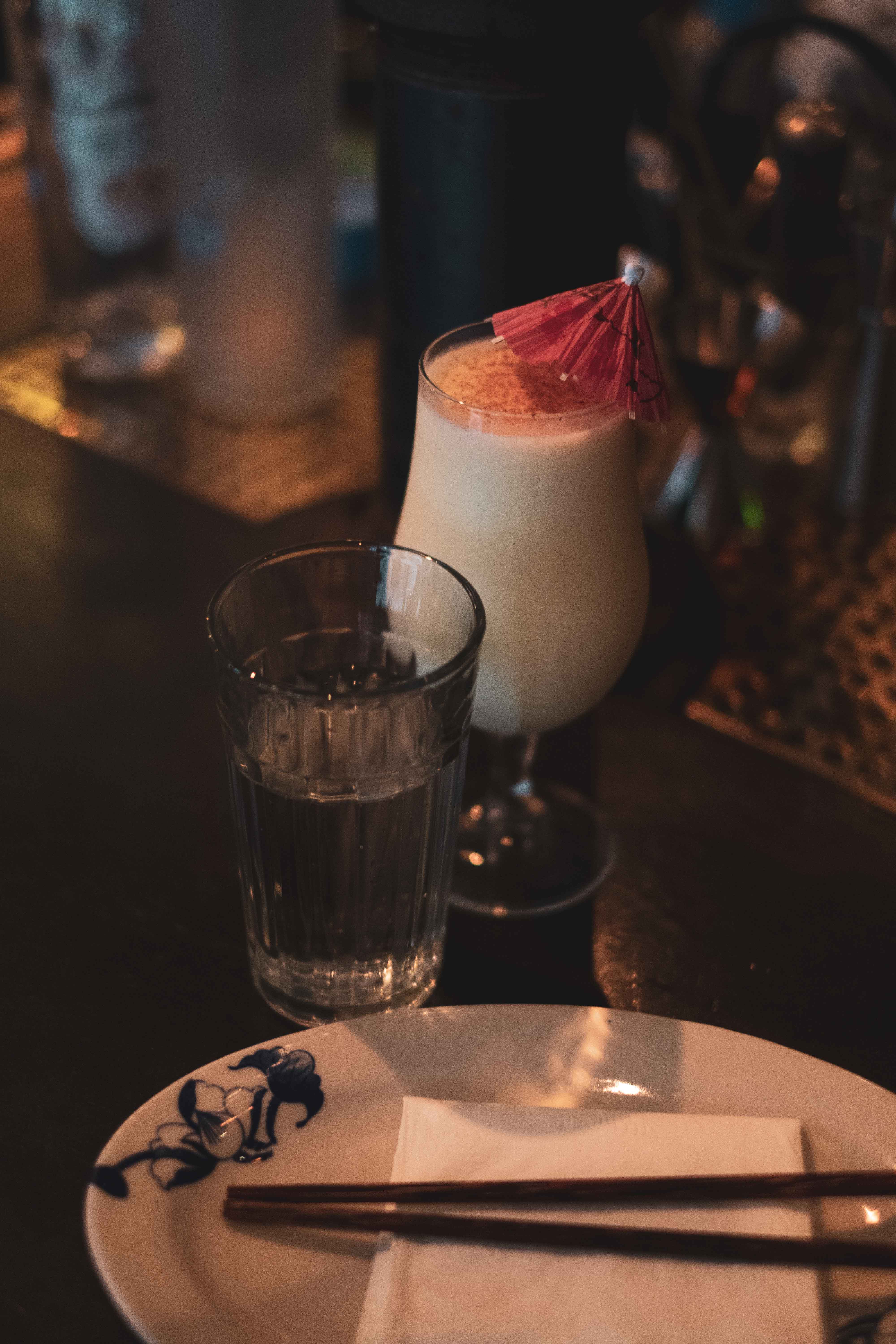 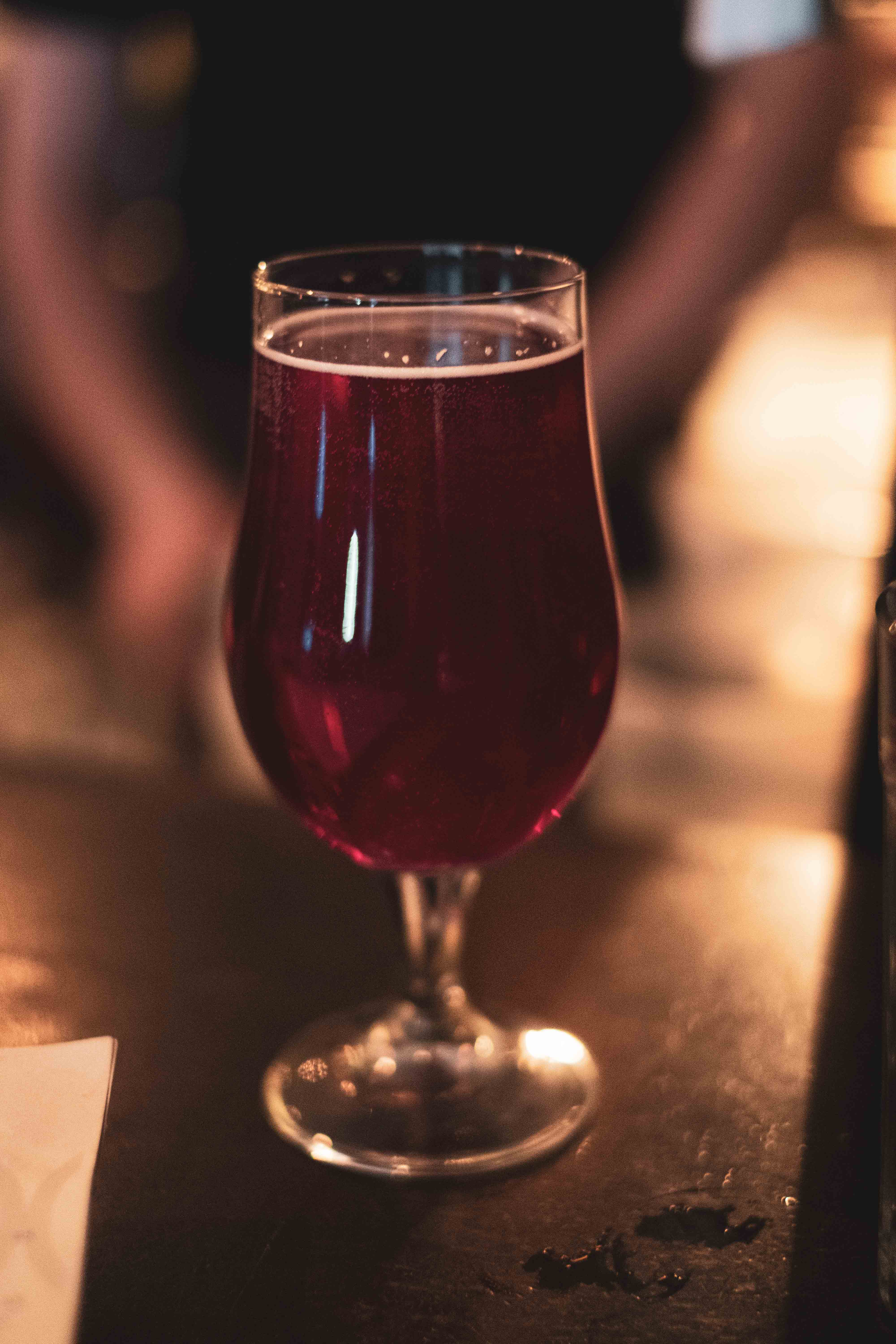 Incidentally, we also had a Pina Colada Slushy and a special craft beer to drink: Locally brewed IPA from the Garvies Point Brewery, which was slightly purple in color due to the Butterfly Pea Flower!

All in all we were VERY thrilled with the restaurant and even more with the food! Jesse and I sat like proud parents on our chairs and were just so excited about what Sara and Ben have built! Maybe we are a bit biased, but I really really want to eat there again tomorrow and I would like them to open another restaurant in Berlin, where we already have many Vietnamese restaurants, but this is the best I’ve ever had, that says a lot! The food was indescribably delicious and the atmosphere, in my opinion, very “New York”. The restaurant is relatively small, always very busy and very fast paced and therefore lively! It is not a place for a quiet dinner moment, but rather the right place to really experience Manhattan!

PS: Here you can find the menu with prices. Per person our meal would cost about 33 euros without drinks. As I said, vegan is not indicated on the menu, but you can tell the waiter that you eat vegan and ask what the kitchen would recommend to you! The restaurant is as mentioned always pretty crowded, so I recommend to come when it opens at 17: 30-18: 30 o’clock or to reserve. And if you really go there on my recommendation, then please say hi to Ben and Sara from me 🙂 I would really like that!

Let me know if you have any questions! And even if you do not intend to travel to New York, I hope you enjoyed our little story. We were just overjoyed after our dinner and could not wait to eat there again! 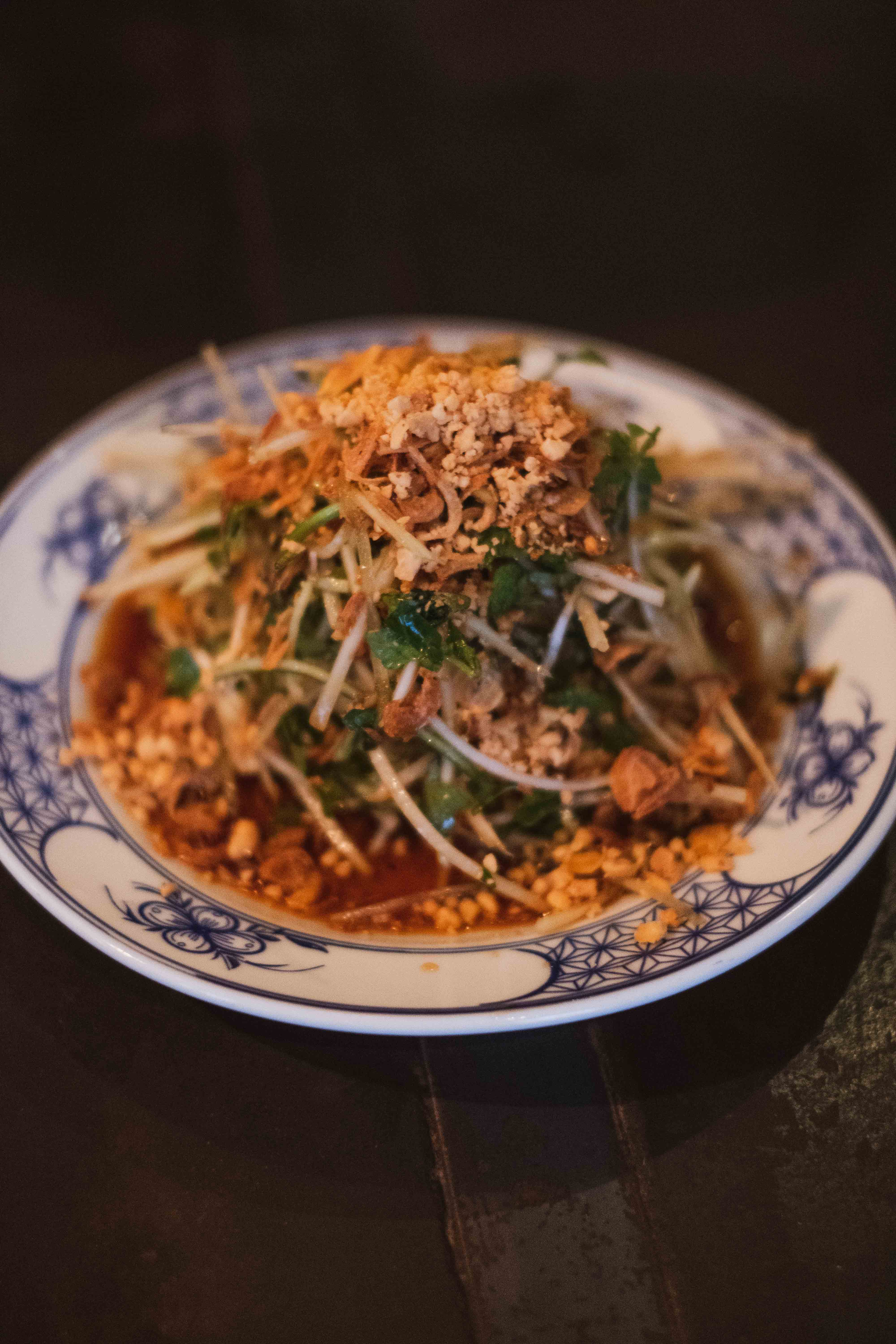 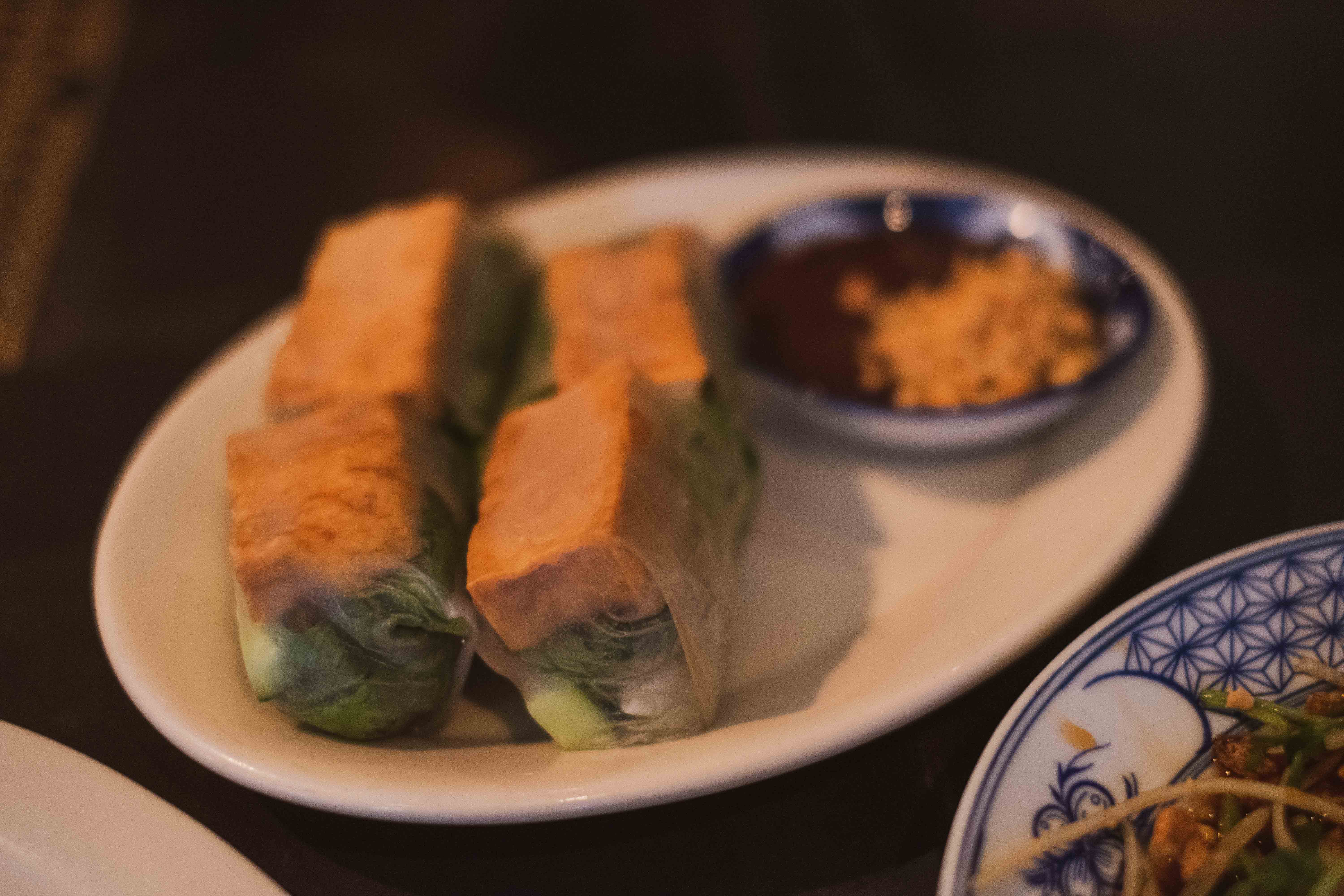 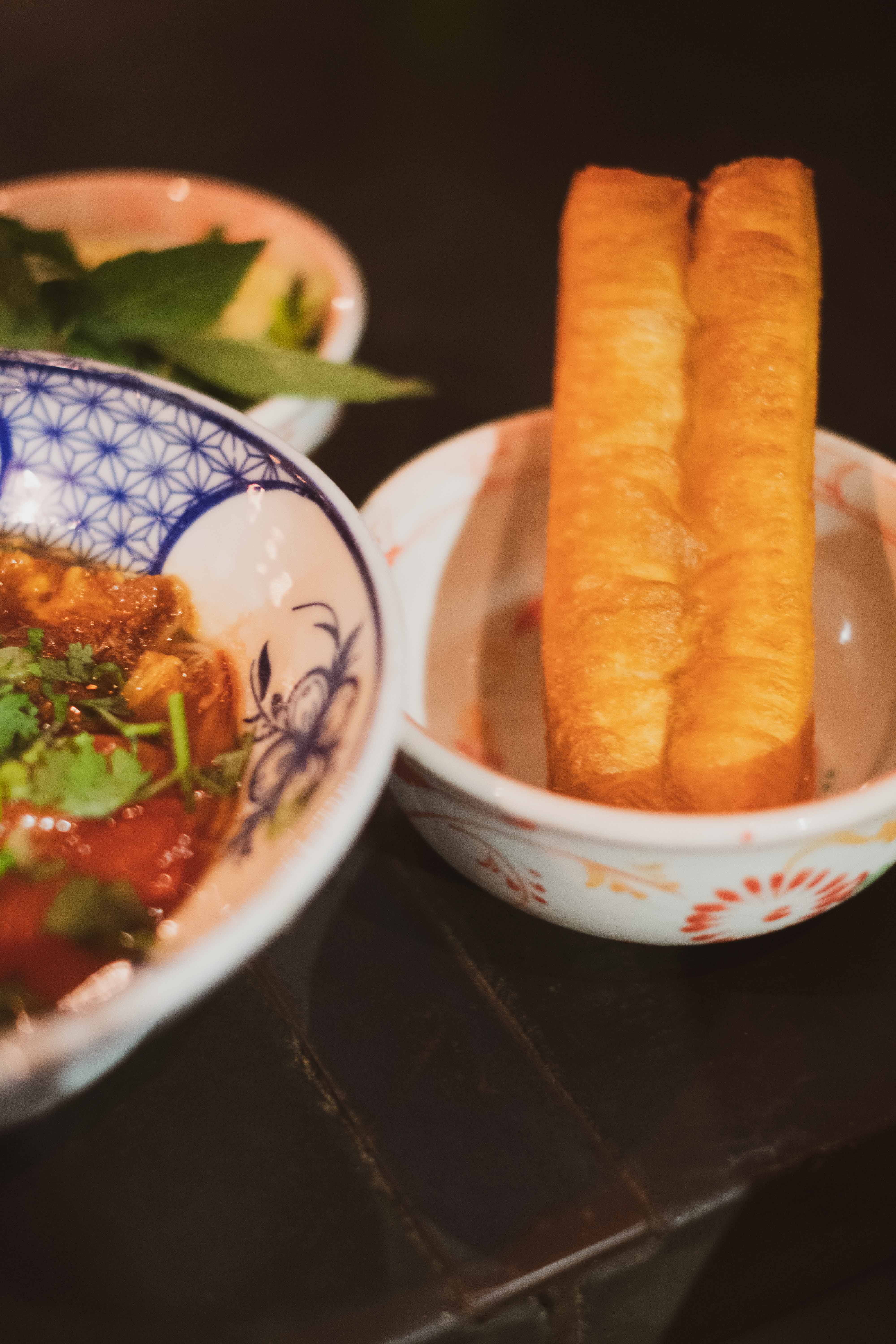 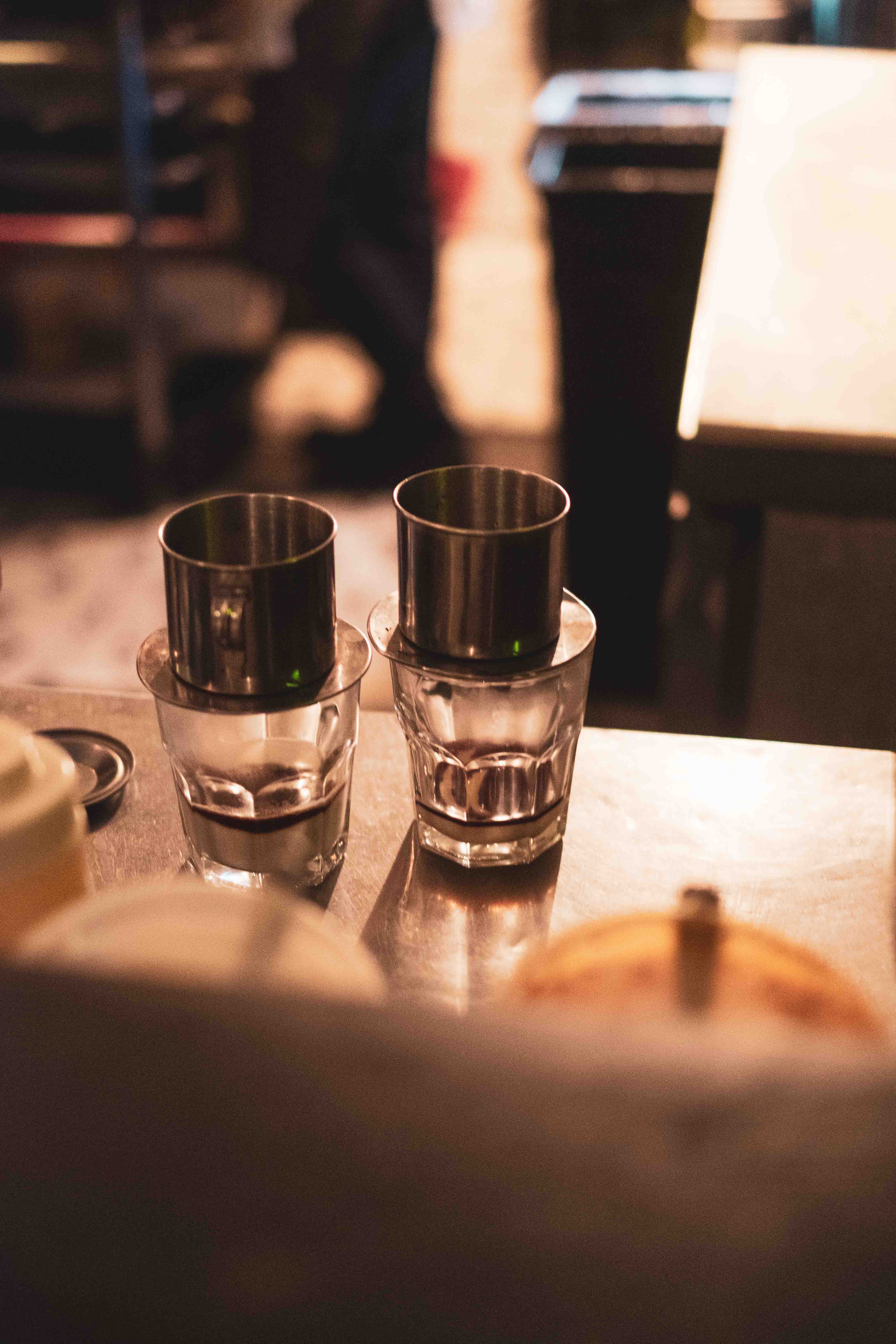 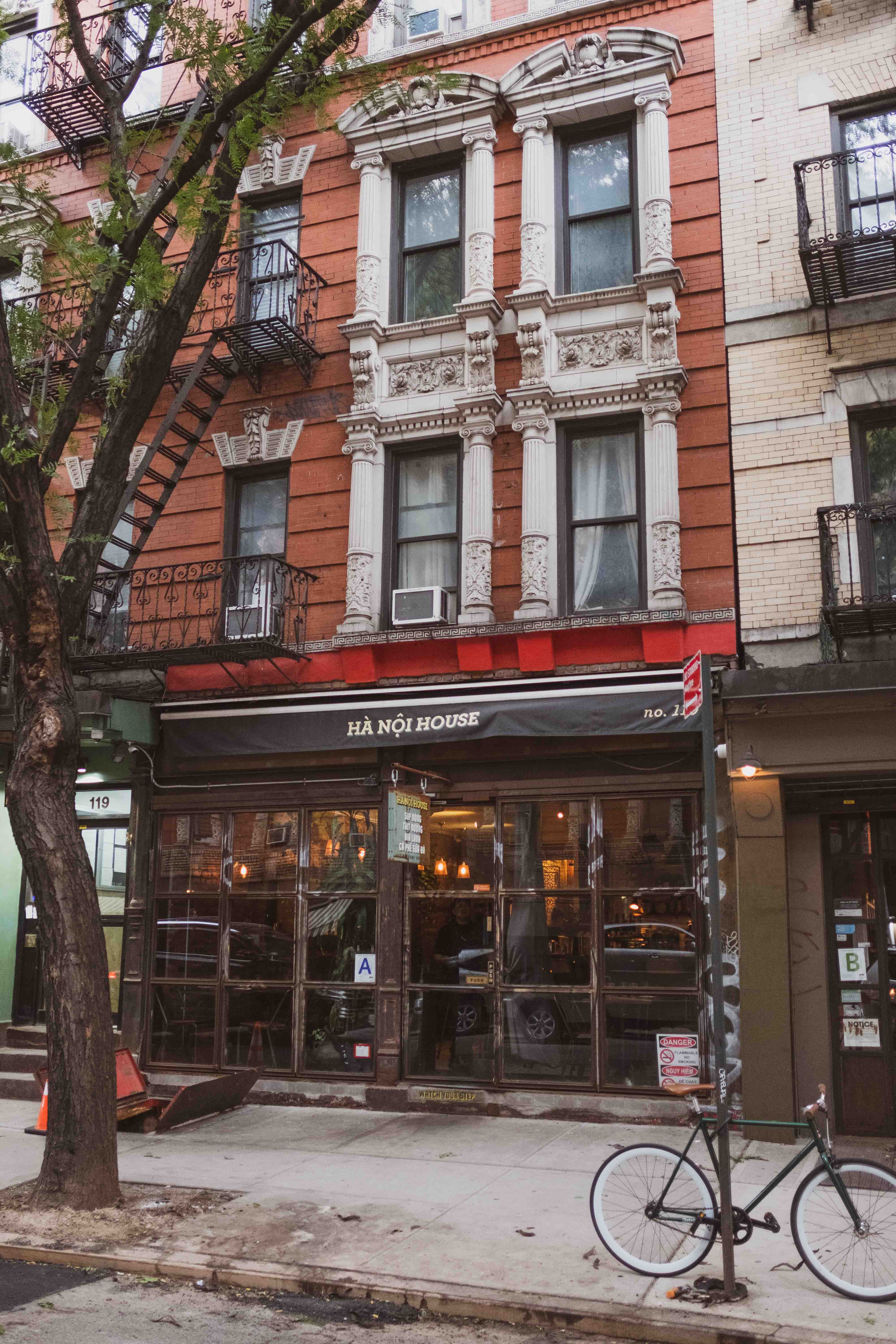 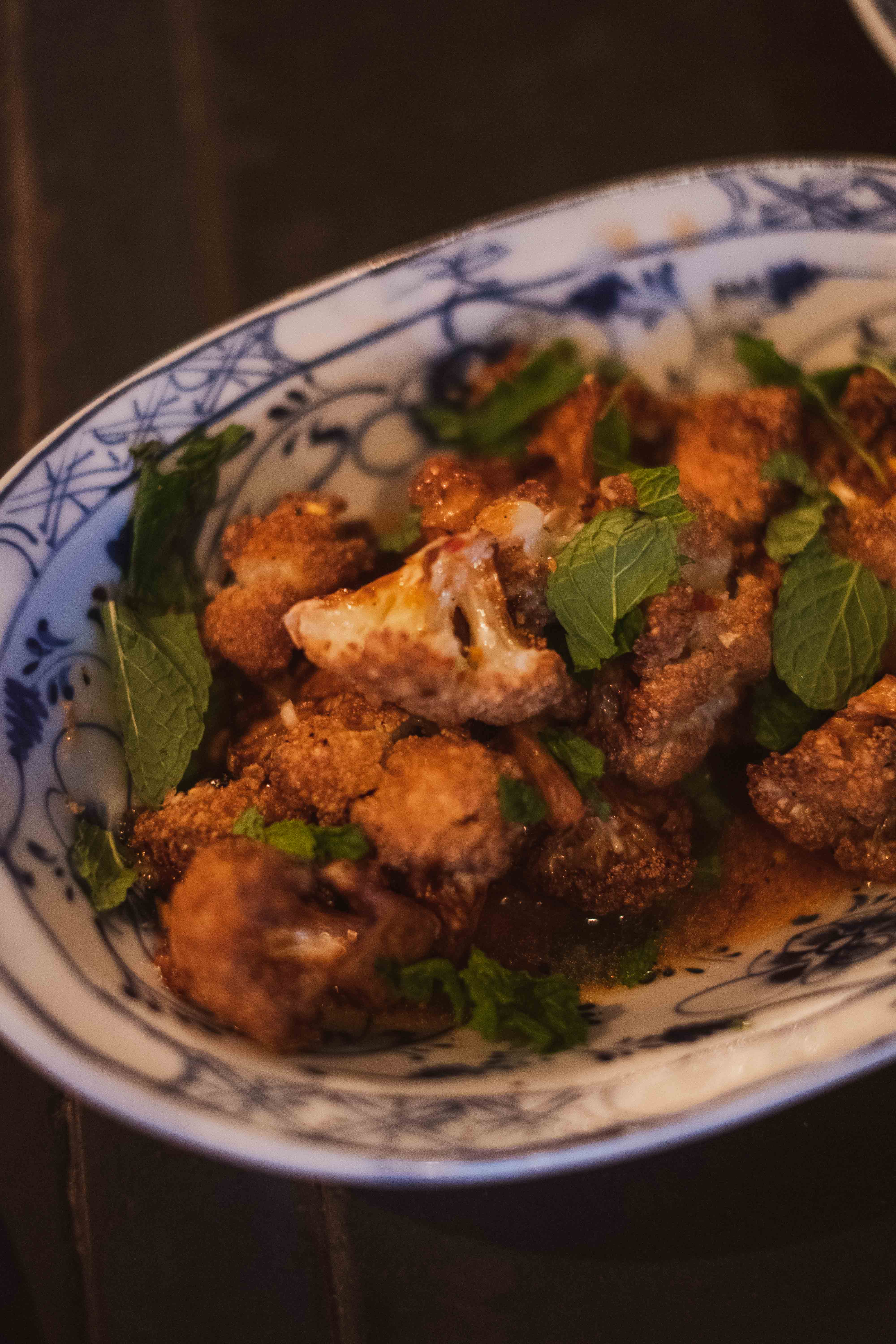 Back to School: Vegan and Ethical Fashion backpacks

A Guide to Ethical Banking