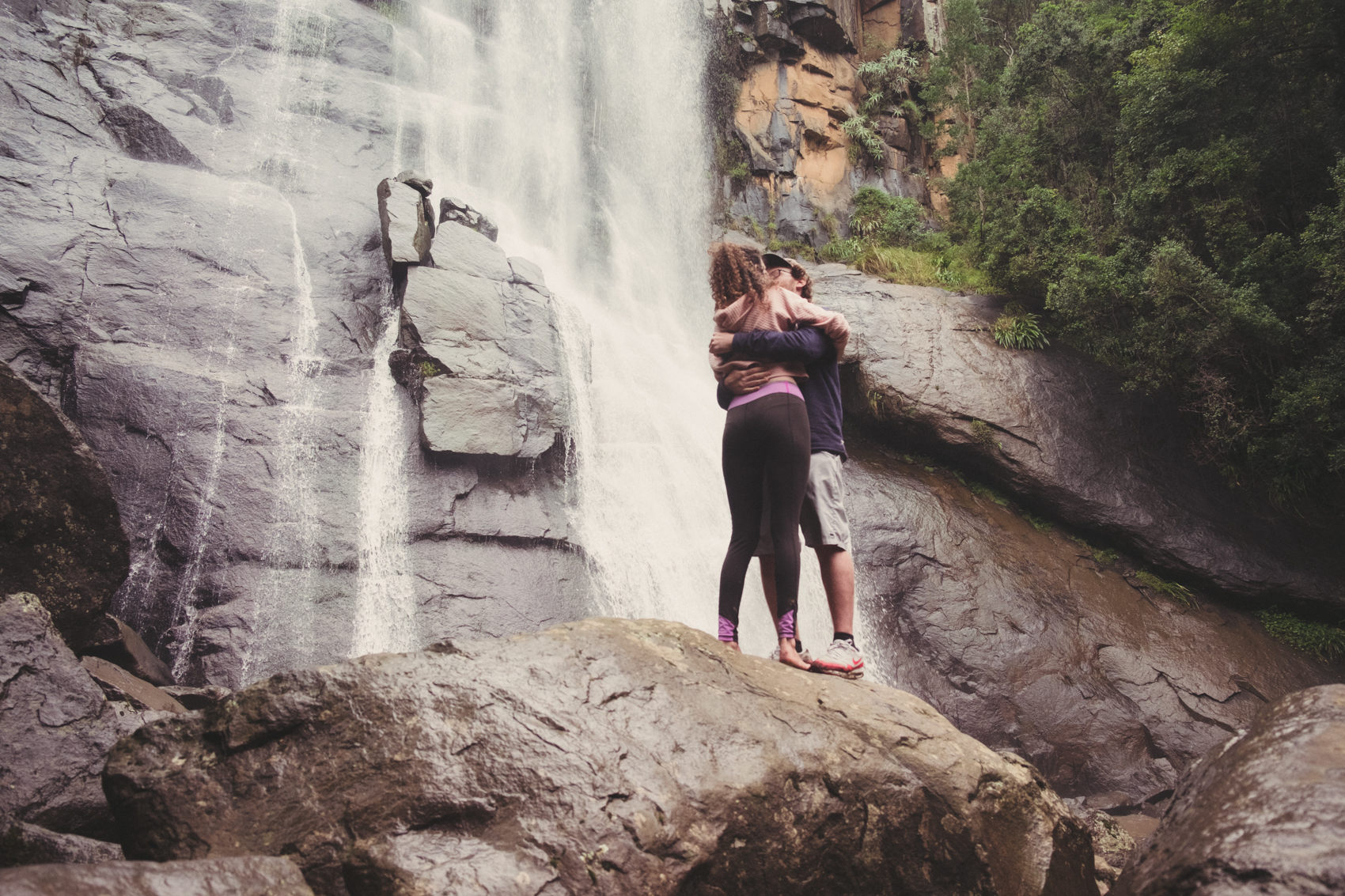 This blogpost is also available in German (auf Deutsch)

I did not think that I would be one of those people who shares their engagement story with the whole world. As you know, I am relatively private when it comes to my relationship and family. I do sometimes share videos on YouTube, where my boyfriend (and now fiancé <3) Jesse appears and I often mention him here on the blog. But you will hardly find any photos of him and me, or posts about our relationship online. I don’t have any rules about what I keep private and what I do not, I just do it according to feeling, and share what feels good to me and don’t share what does not. And of course it’s also important what content Jesse feels comfortable with, as he is reluctant to be in front of the camera 🙂

But today it feels good to share one of our best moments together! On Instagram, I have already shared our engagement with you, as well as a short caption with the backstory. I think the Instagram post was the most popular on my channel ever : P I could only give a very brief version of the story on Instagram. Here on the blog I have more space 🙂 And in advance: things never happen are you plan it, but often they turn out for the better:

As you know, I am currently visiting Jesse’s family in South Africa. After a week in Cape Town, we all went to East London together for a bar Mitzvah and slept at Jesse’s aunt’s place. Jesse knew that although I like to be surrounded by family and friends, I always enjoy a day or two where I get to be alone with Jesse. So he suggested a night in Hogsback, a small tourist town in the mountains, surrounded by scenic trails and stunning waterfalls. Not for nothing, Tolkien was inspired by Hogsback when writing the hobbit. 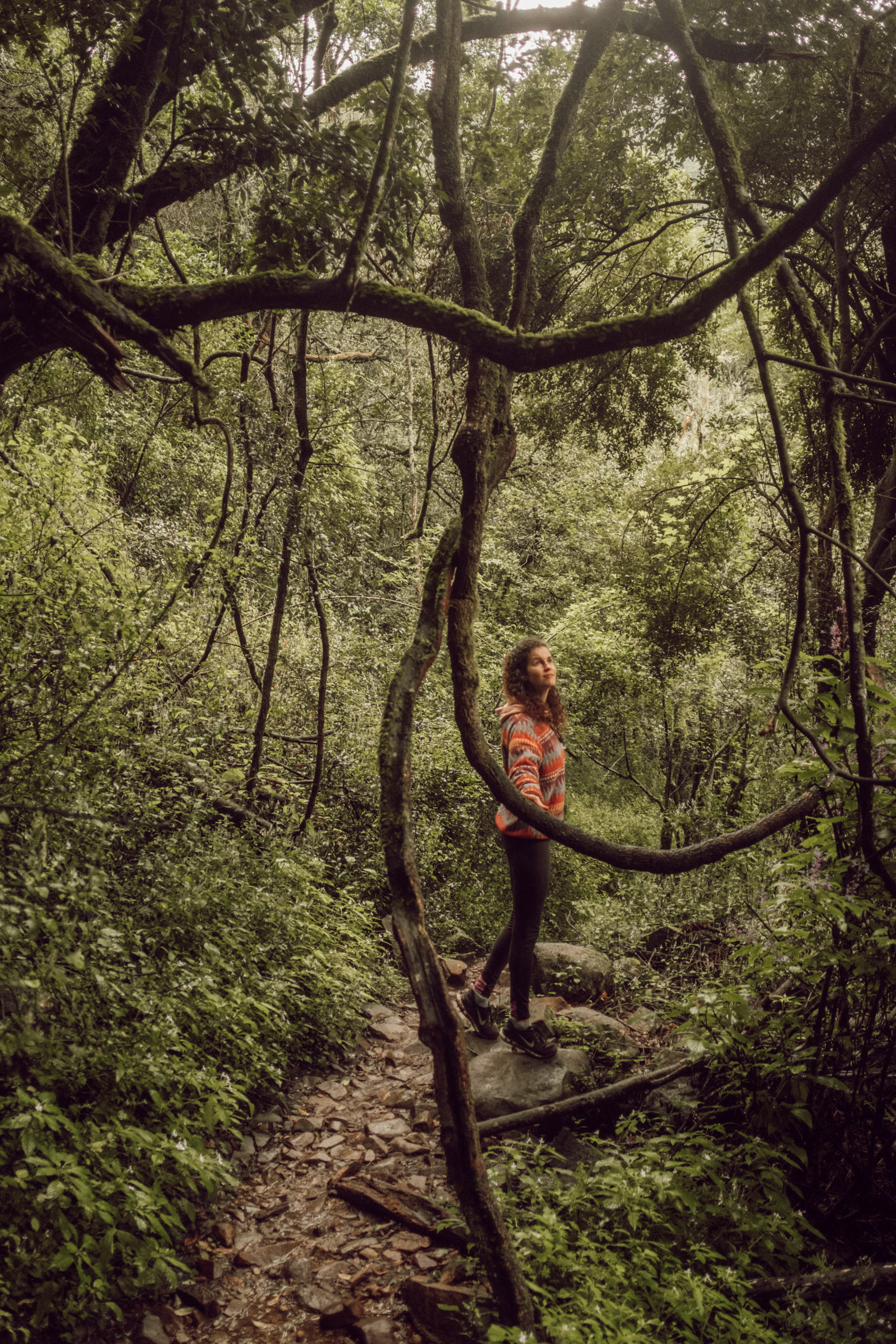 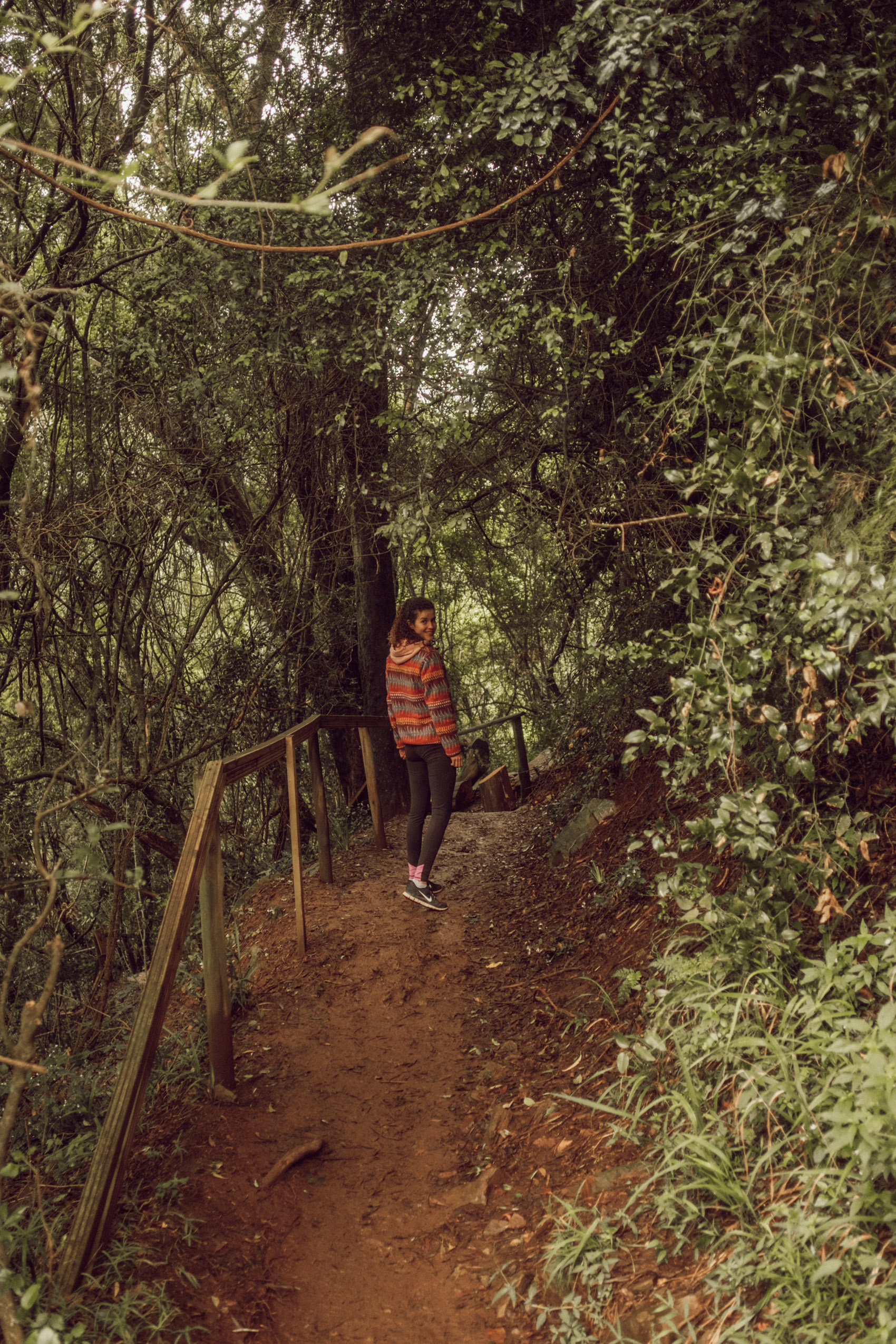 But as Murphy’s law goes, of course, everything did not turn out as planned. On our arrival the weather was suddenly much worse than forecasted, the whole place had a power failure, there was no cell phone reception, the reception of our hotel was therefore a bit stressed and mega rude on our arrival, the tourist office said that all restaurants are closed due to the power failure and that all of the trails were closed as well because they dangerous after heavy rains. Of course, I was a little disappointed, but I was still in good spirits, because as I said, I just wanted to spend a day alone with Jesse. Jesse, after all these bad news but hung his head, he only said that he had planned it all differently.

Luckily, the only restaurant that was open was Butterfly Bistrot, which is vegan and vegetarian friendly, so we went there to have lunch and discuss the “situation”. The food was delicious and I was really happy about the falafel plate and my soup. Strengthened we could better make plans. We decided to definitely visit the small waterfall, and also drive to the at least try to see the Madonna & Child waterfall, the largest in the area. We wanted to see for ourselves if the paths really are so slippery. We can always turn around, we thought. 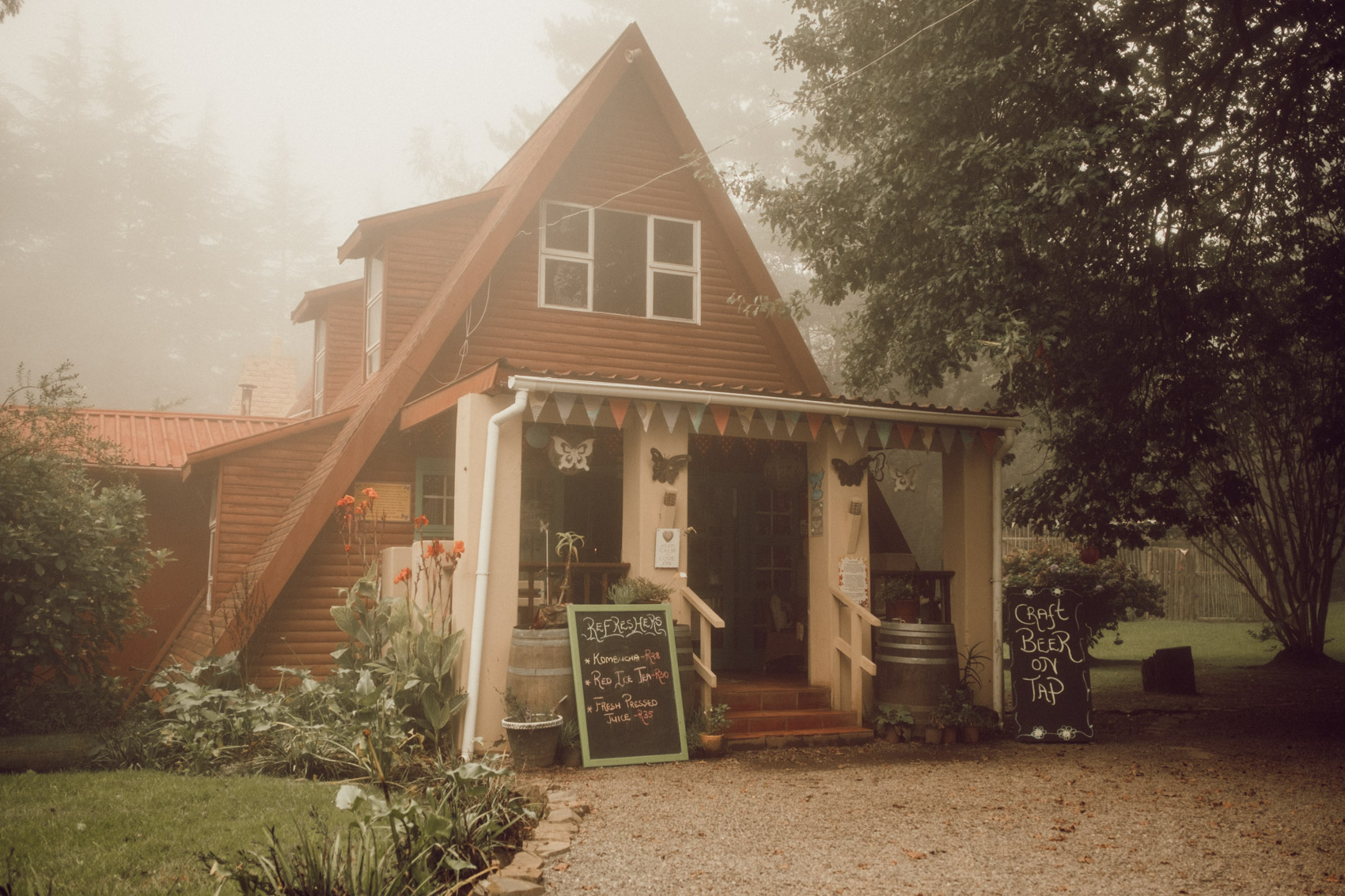 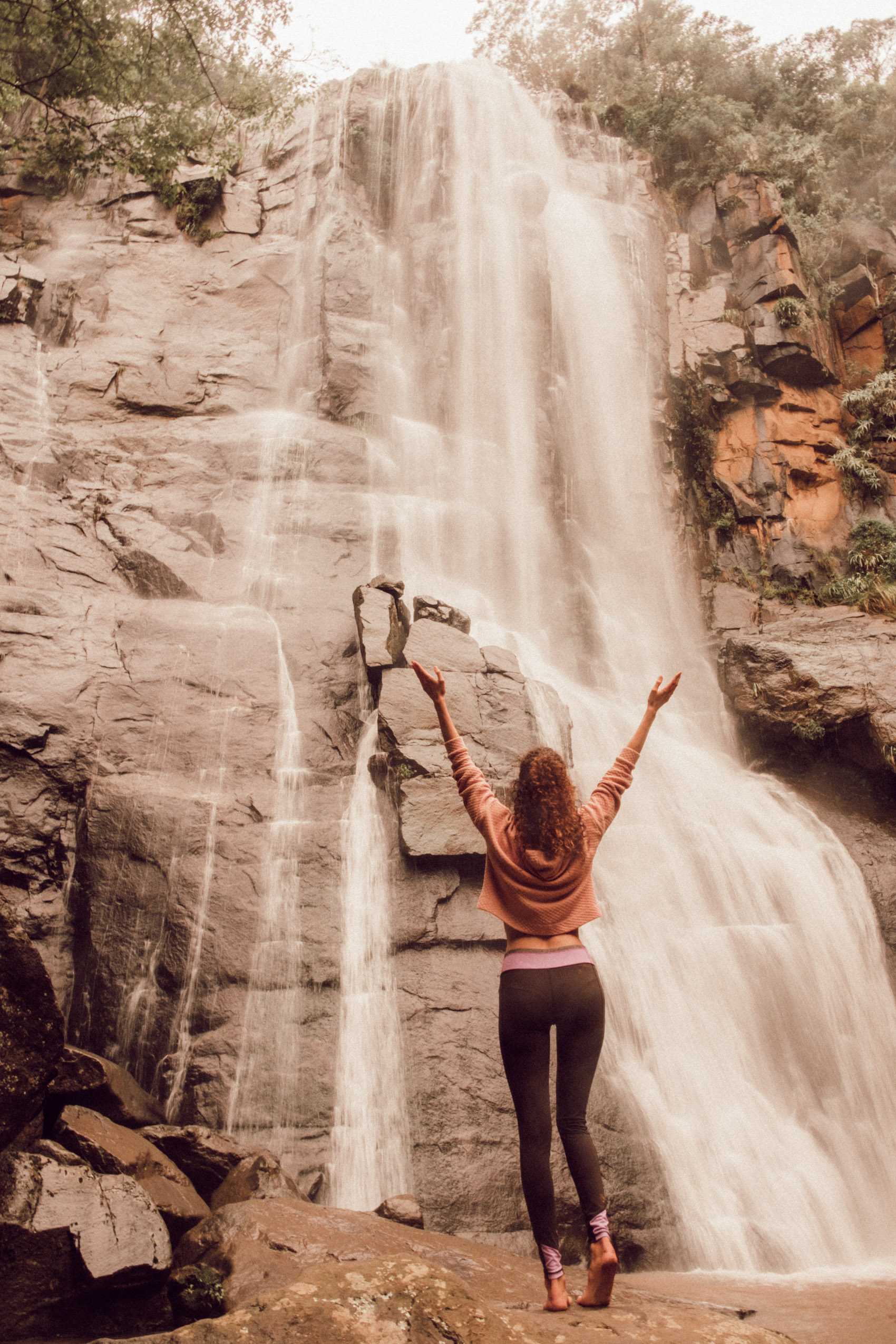 The descent to the Madonna & Child was not as difficult as expected. There were 1 or 2 places that were very slippery and where my hands, feet and clothes got really dirty: D But otherwise the descent went well and we were able to do the mini-hike! Arriving at the bottom we realized immediately that bathing in the water basin of the river was really possible there, but due to the strong rains the Madonna & Child waterfall was even more powerful than usual, simply breathtaking!

As always, we took some pictures. I posed on the rock, there was a little back and forth with the lenses and the shoot was a wrap. Jesse then proposed a joint photo at the end and I did not think anything of it, because we talked a few weeks ago about the fact that we want more photos together and therefore should not forget the tripod on our travels. Jesse set some function on the camera and then came to me on the rock, where I sat waiting for him. I thought we were doing the photo sitting down. He then pulled me up to him. But when he turned me around, I realized that something was going on. 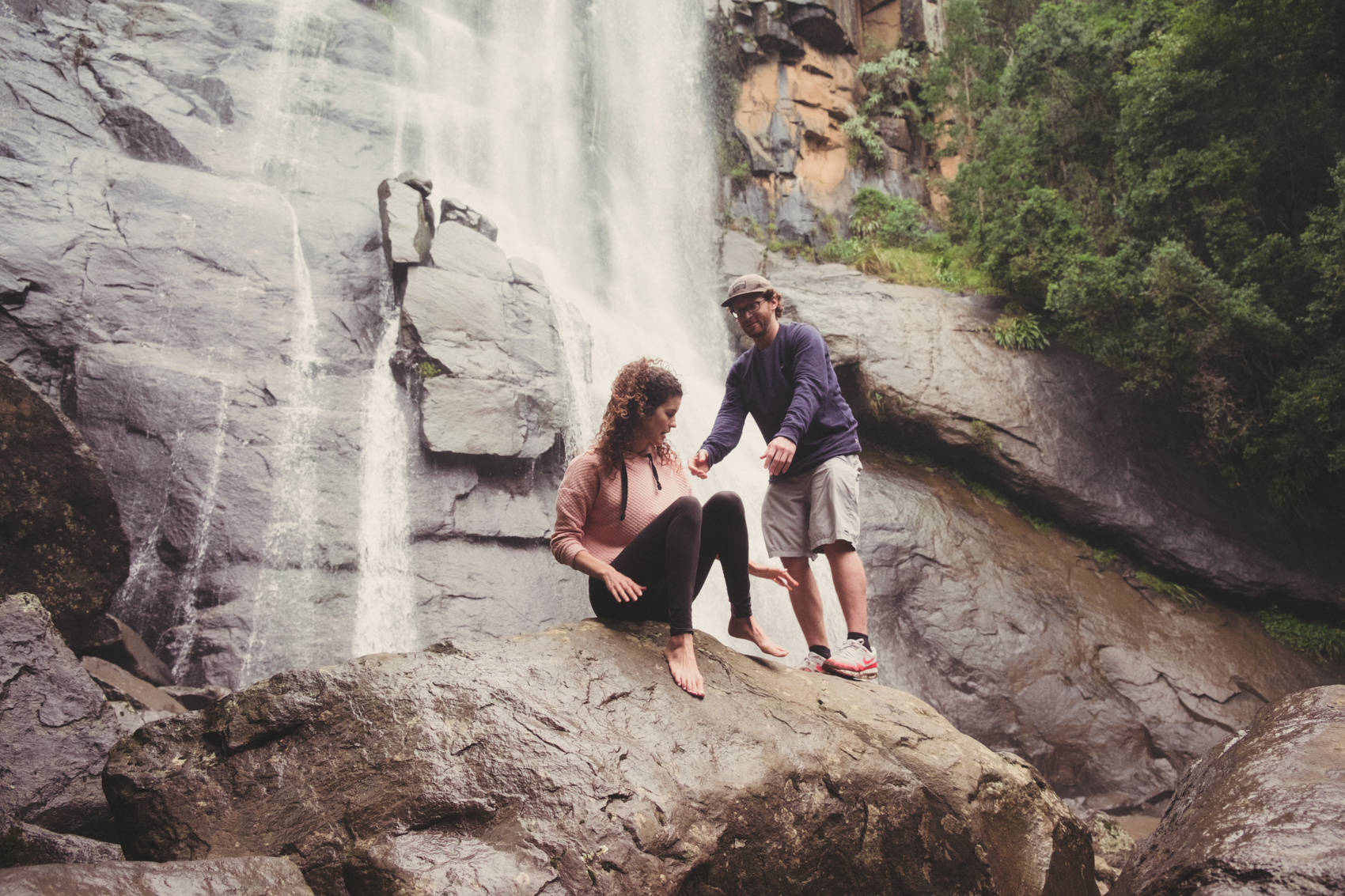 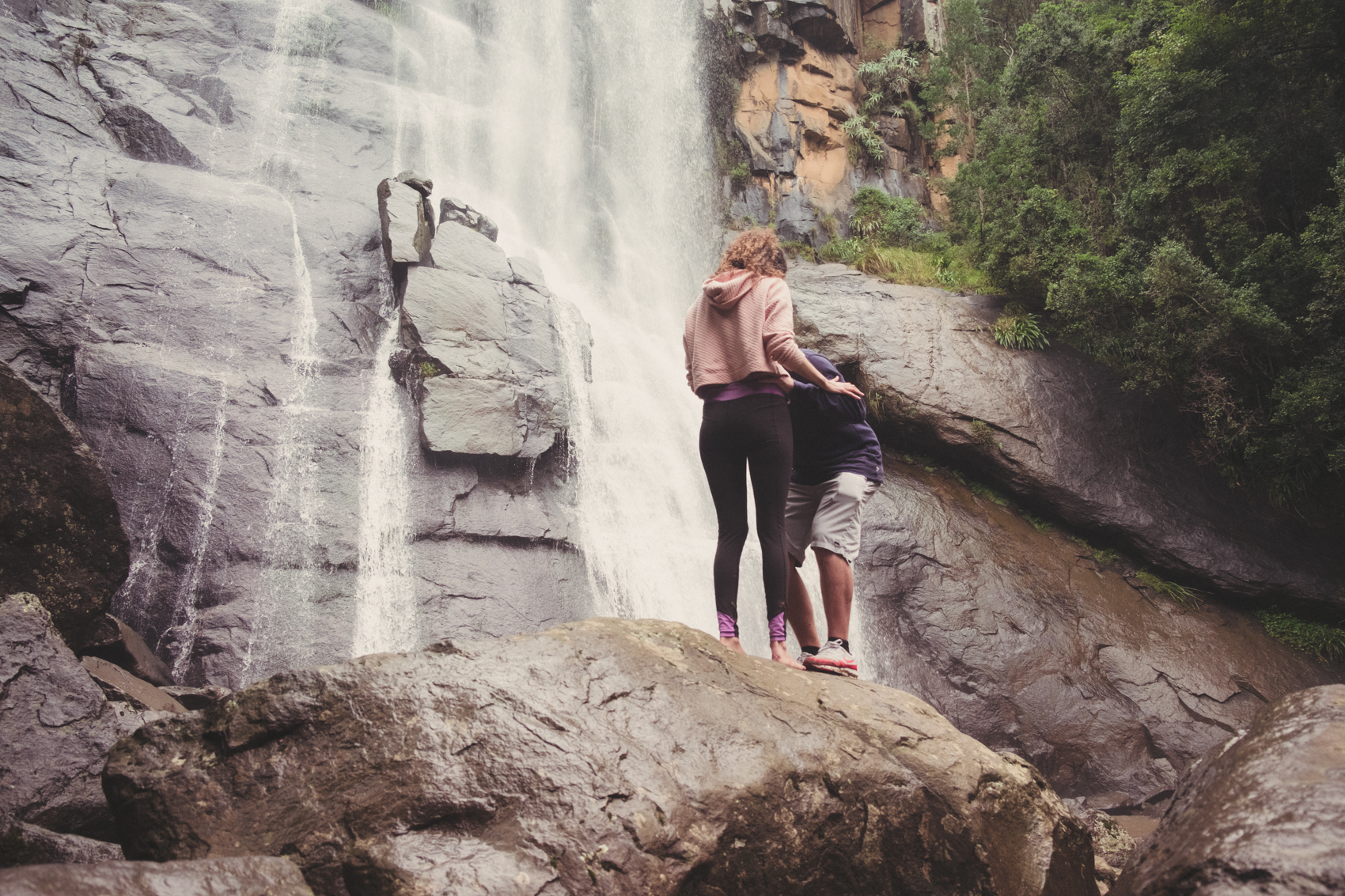 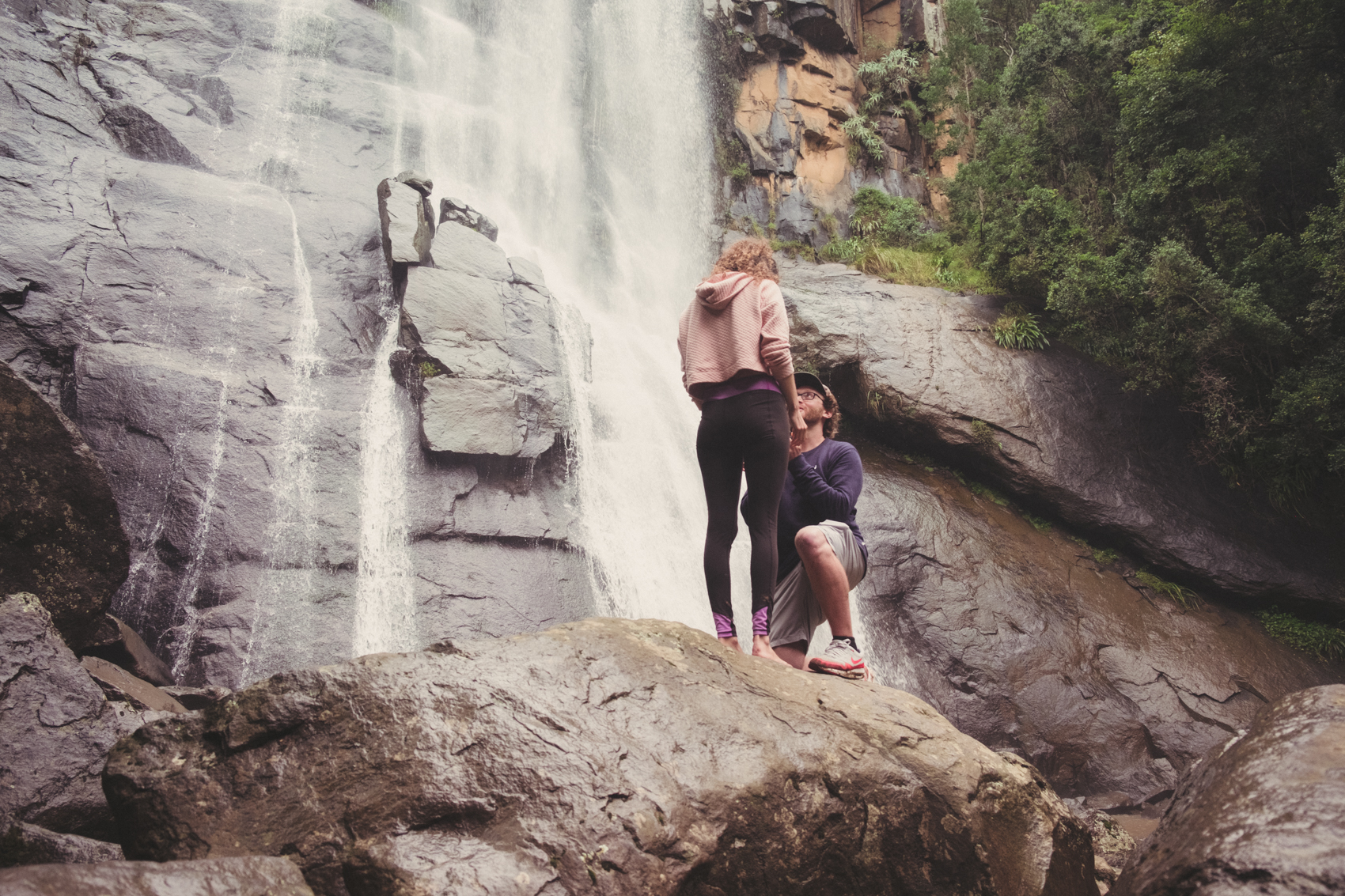 Very nervously, he looked me in the eye and I cannot perfectly piece together anymore what he told me. For one thing, he was really very nervous and he said he did not say exactly what he wanted, and on the other hand, I suddenly got very nervous, because now I knew what was going on. But I definitely remember him saying that he had been waiting for the perfect moment for a long time and that he was here now, that he loved me, and that I was his best friend. I’ve never seen him so nervous and I was just so happy!!! Because of course he is also my best friend, my big love and just everything! On the rock, he then went to his knees, pulled a small box out of his pocket, showed me a wonderful ring in it and asked me the question of all questions 🙂 Of course I said yes, haha ​​:)))) and there were many Kisses and hugs. We were both soooo happy !!!

Since Jesse had set the interval function on the camera, so that we would have a photograph of the moment, 120 photos were taken which let me make a small GIF out of it. How great is that????

The advantage of bad weather: there was not a soul far and wide during the proposal. Jesse put the ring on my finger and helped me down again. I just thought the moment was perfect. My fingers were full of mud and a sparkling (vintage) diamond ring on it, I was barefoot, my feet were also very dirty and we both were beaming. After some time two guys came, which we found convenient, because then they could take a picture of us without a tripod 🙂

That was my story, but of course Jesse’s story is quite different: D 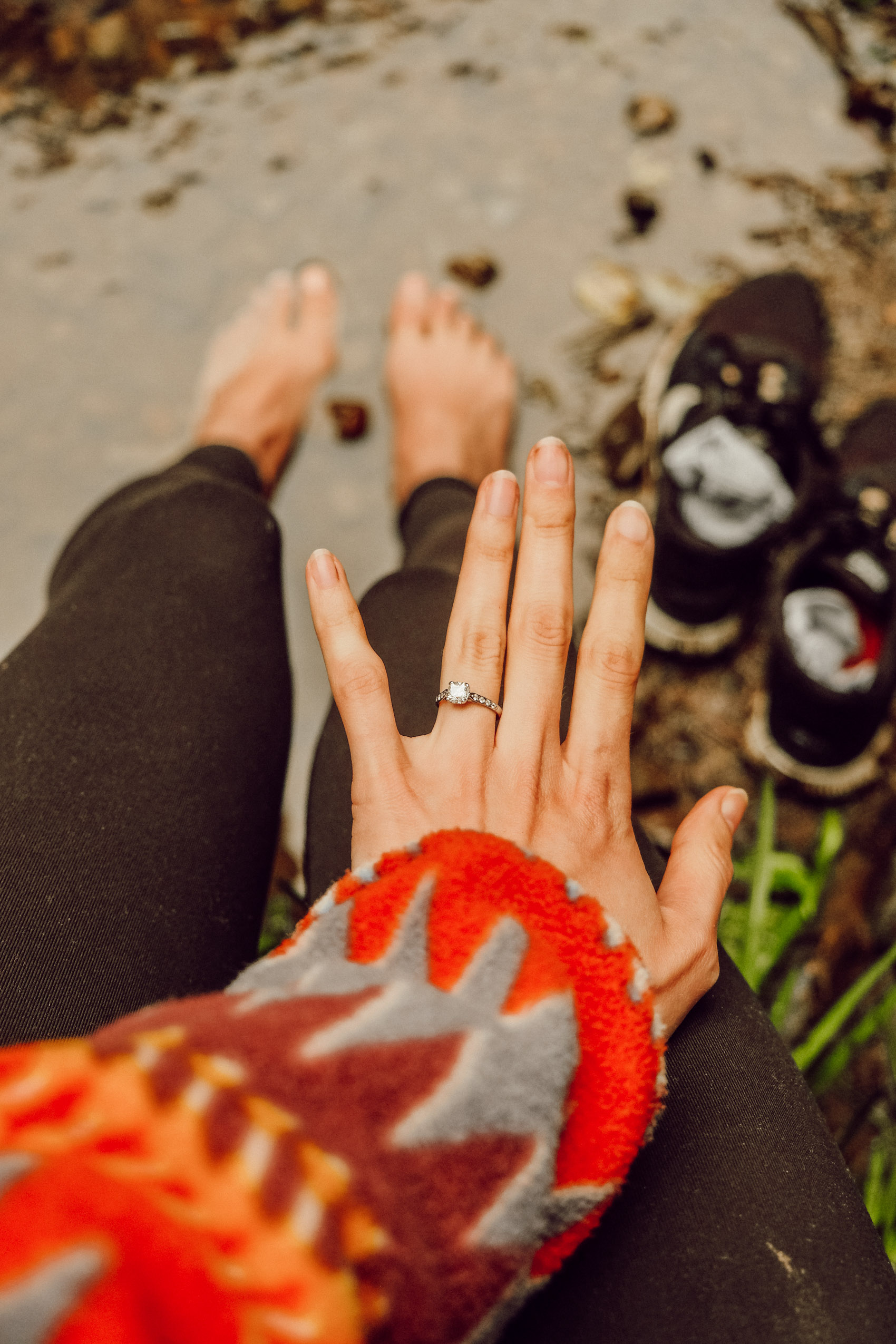 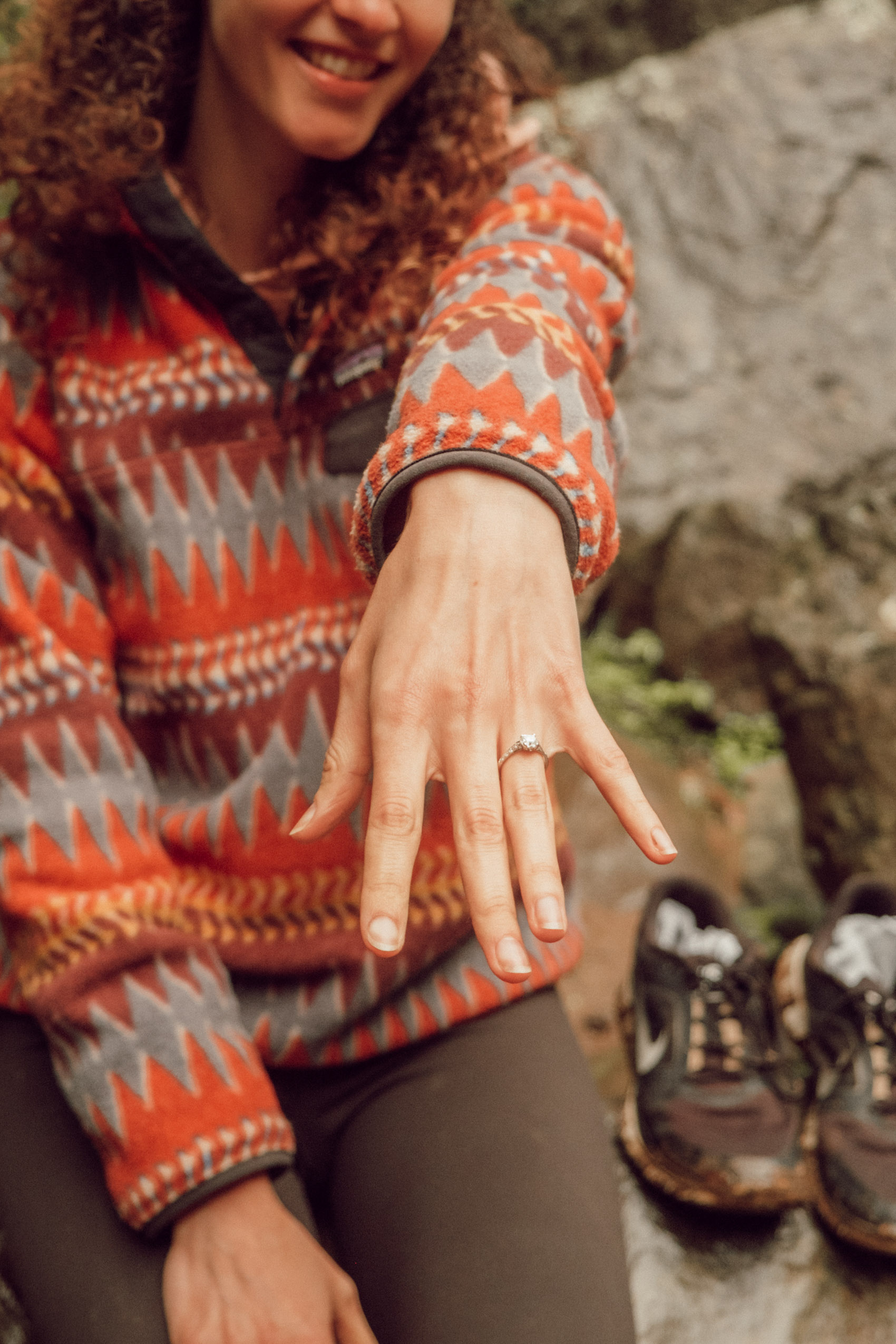 Long ago, he got a ringe from his grandmother, which she told him he could use the diamonds from. He always knew I did not need a fancy ring, a recycled one from Etsy would have been more than enough! But of course he also wanted to use the inherited diamonds. But I have a very special taste in terms of jewelry. He had the ring specially made for me by a jeweler in South Africa who is a family friend and he could be sure that he could discuss with him all wishes. There was apparently still a long back and forth, because the ring was much too angular and edgy, but I prefer filigree and fine details.

After the ring was finished, he actually wanted to do the proposal in Germany. For that he had planned a weekend in the mountains, or a long walk in the woods. Therefore, his uncle brought him the ring from South Africa on a business trip to Germany and the two met secretly in Leipzig, haha ​​:) But I was really busy from November until our trip to South Africa with work. I had almost no weekend free and when I had some free time we were surrounded by friends or family. Hardly any romantic hours for just the two of us. That’s how it is to start your own business. You work almost around the clock and in December I could not say no to the busy time and opportunities.

Looking back, I can remember Jesse always asking if we could to take a long walk in the woods this or that weekend. But either this walk was related to work, or it did not happen at all…poor guy, haha

So the ring came to South Africa now, as there might be opportunities here as well 🙂 But Jesse did not want to do it while the whole family was around us. He knew that I would not find that great either and love something more private than that. Then we had the opportunity for the two of us to go to Hogsback alone and Jesse had everything planned in his mind: drive to Hogsback, romantic hotel, hike to the waterfalls and at the right moment he asks, then in the evening dinner at a winery. As you read above, everything turned out quite differently, but everything was still perfect! Our lunch was great, the hike exciting, but doable and since the weather was so bad, we had the waterfall all for ourselves!

In the evening we even had the opportunity to participate in a wine tasting and dinner, but I really just wanted to spend time with Jesse alone. So we went shopping in the mini-supermarket and made ourselves pasta with tomato sauce 🙂 Before making dinner we had a little walk to “The Edge”, where there was a sweet garden. In the pictures you can see how much I shine! 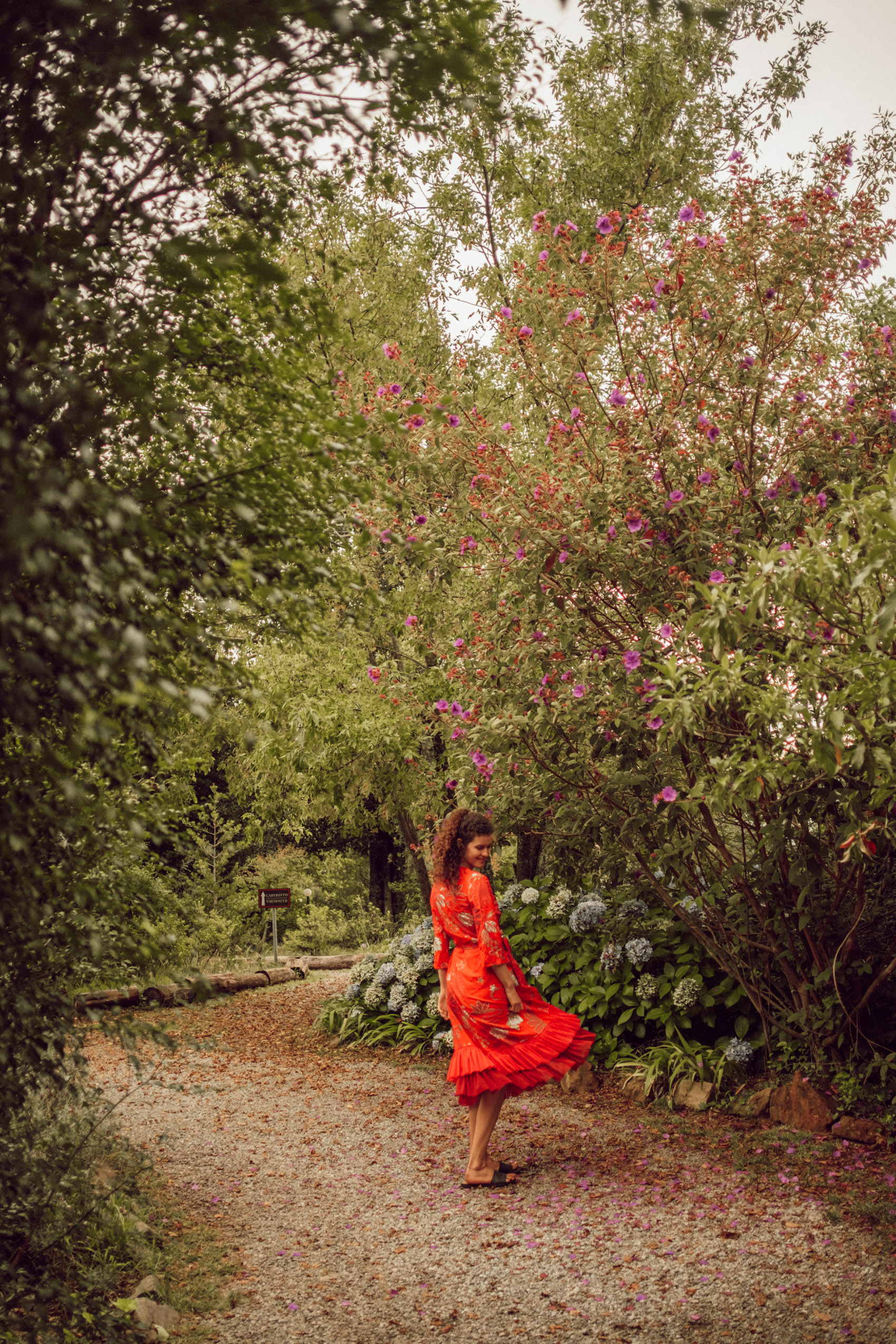 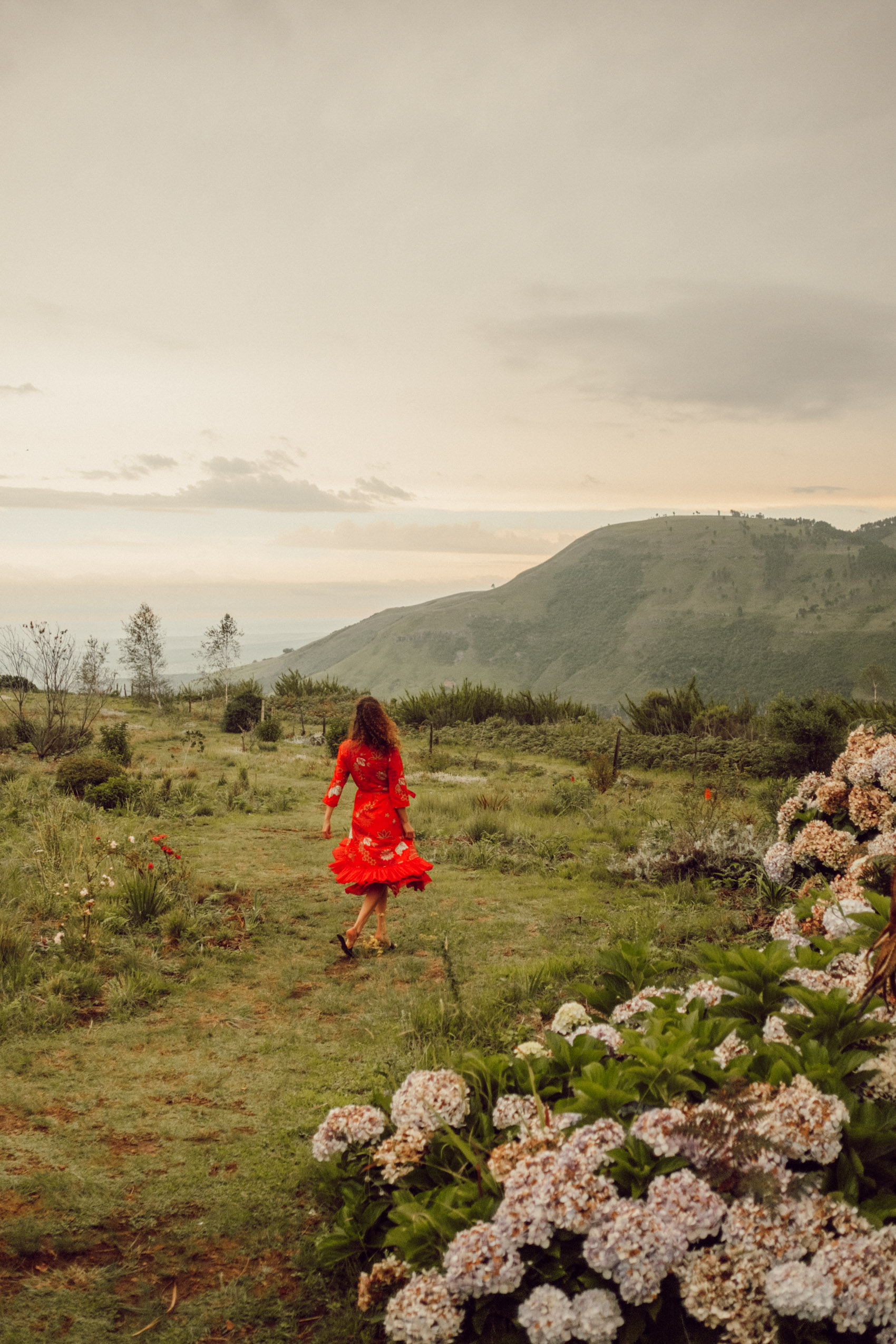 Everything was different than planned, but it was wonderful!!! The moment was perfect because it was exactly what Jesse and I love to do together: micro-adventures and walks to waterfalls! Due to the poor internet and mobile connection, we could not reach all family members and wrote only a few friends. So we could spend more time just for us, as a couple.

The next day we had breakfast at the Butterfly Bistro (Veggie Schnitzel!! Yum!!!) and then visited the small waterfall, 39 Steps Waterfall. But it was not that small and the way there was super cute and picturesque! In the beginning, I still thought that the area reminds me more of Austria, than of South Africa, until we saw some monkeys jumping from tree to tree, haha! 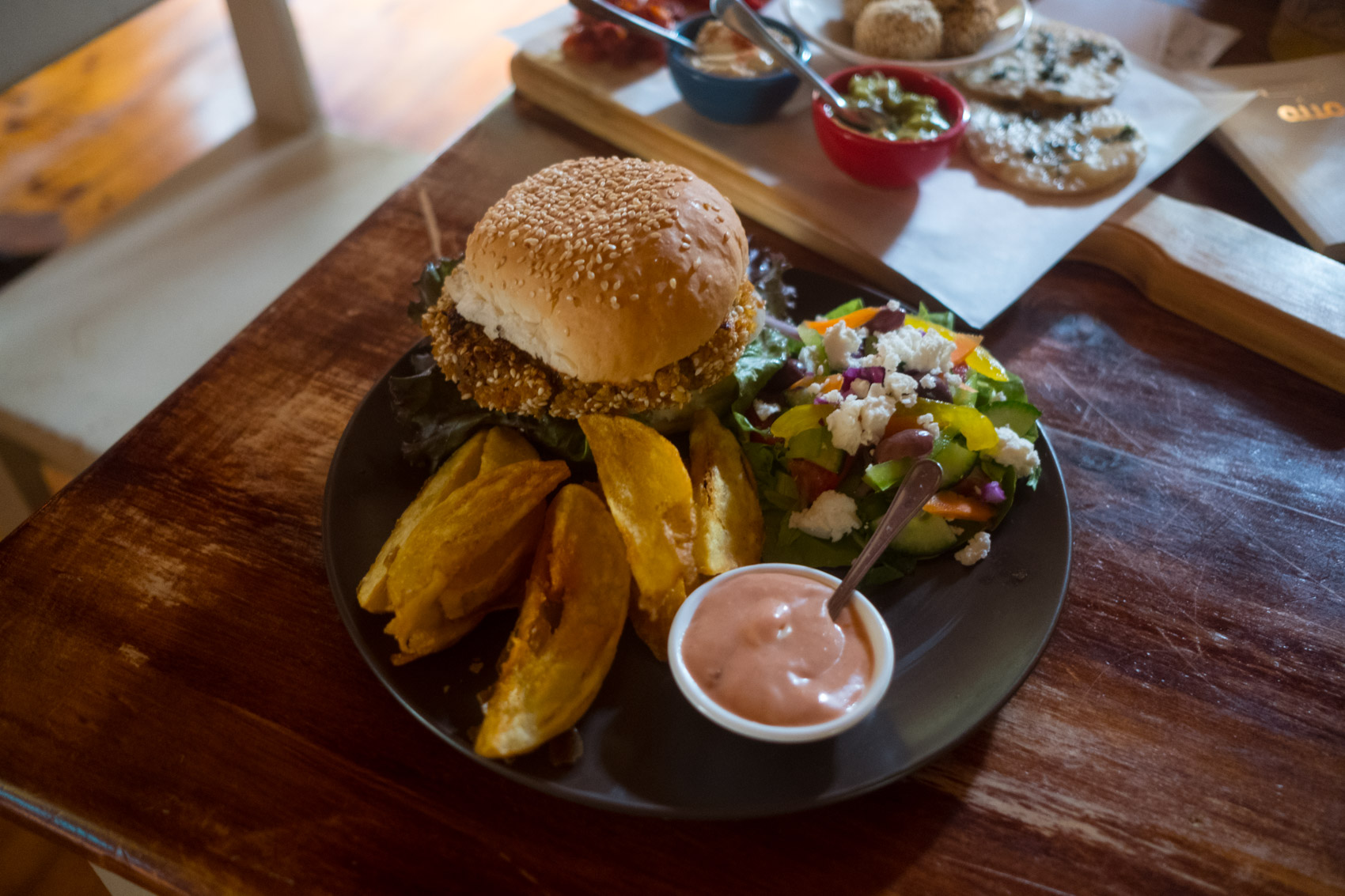 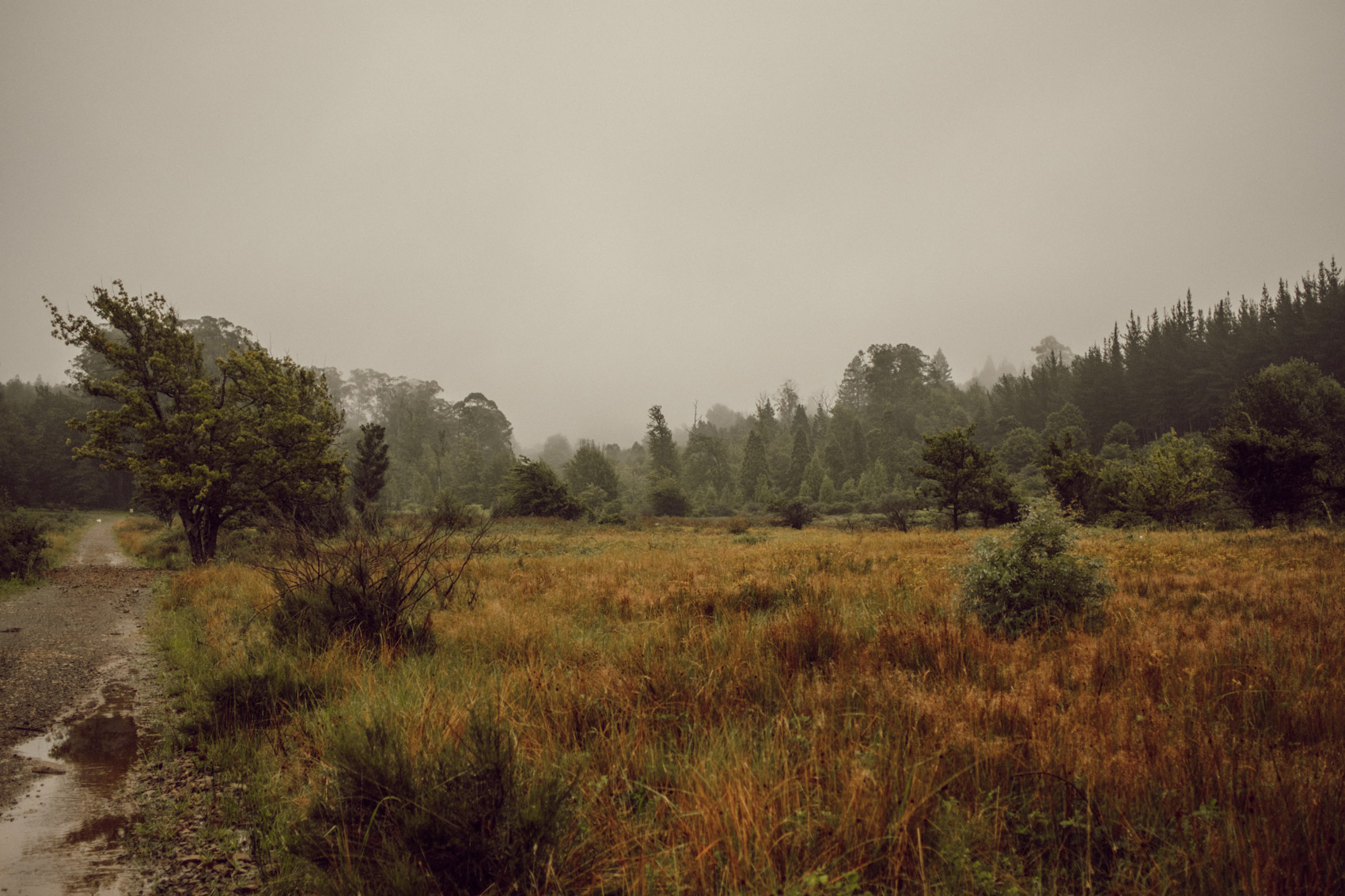 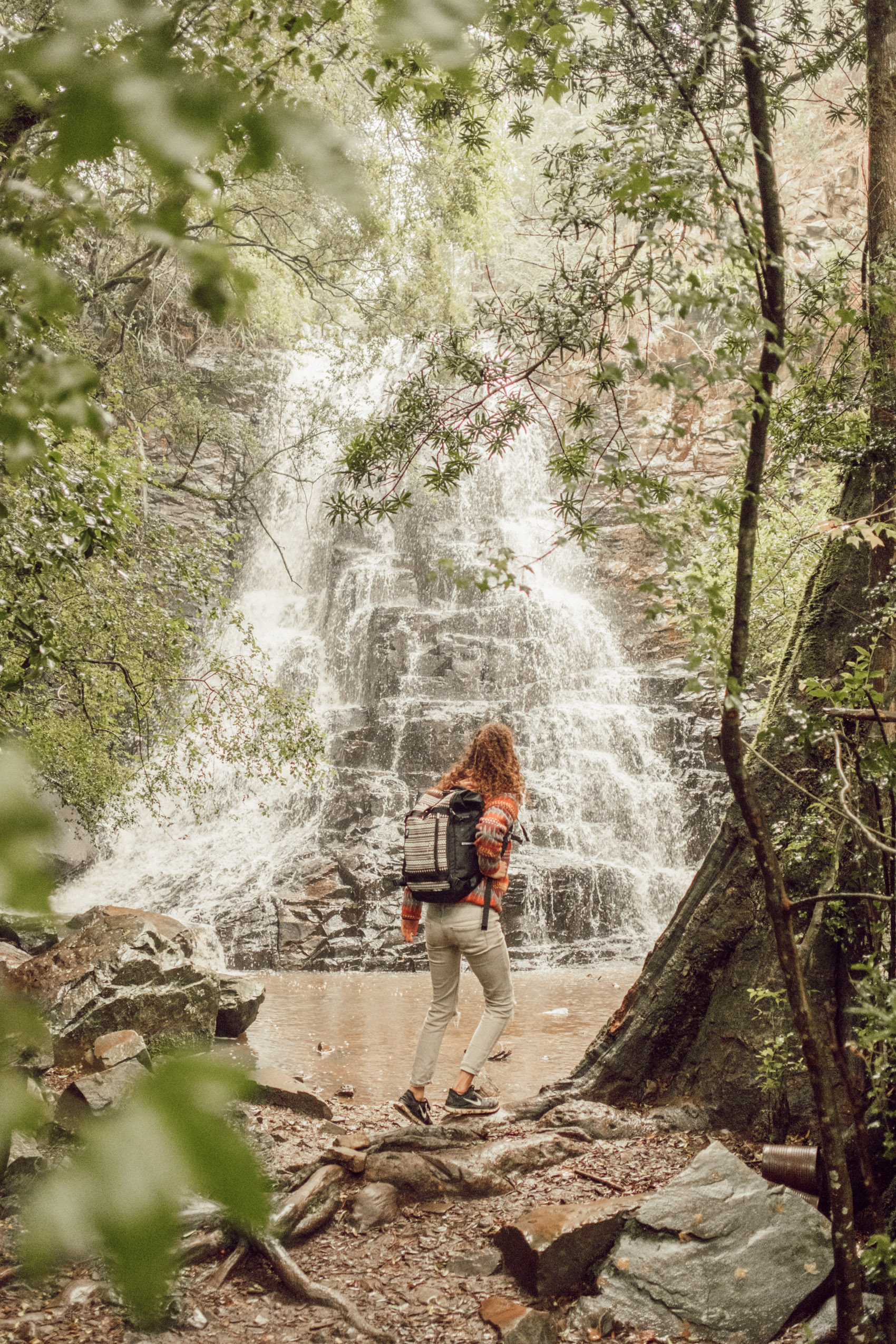 Oh yes, and another fun fact: Since we were finally alone on the road, I decided to vlog during our time in Hogsback and now I have a video of the day!!! I have to cut that together and then will add it here. But believe it or not, I really had no idea he was planning the engagement in Hogsback, up to the point of pulling me up the rock! 🙂

And even if nothing went according to Jesse’s plans, it was a perfect 24 hours!!! Back in East London, we were able to tell everyone our story. We had the ring adjusted (although Jesse had the right size, it was too big because the jeweler did not dare to make the ring that small) and after two days I shared it on Instagram as well.

It was so nice to read, how you all were so happy for us! Not only have I received innumerable comments, but really nice messages from so many of you about how you are happy for us and of course a lot of congratulations from you! THANK YOU!!! That really overwhelmed me and I am so happy to have this community with you!!!! 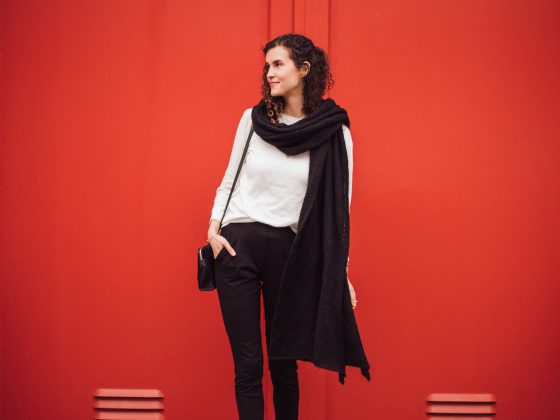 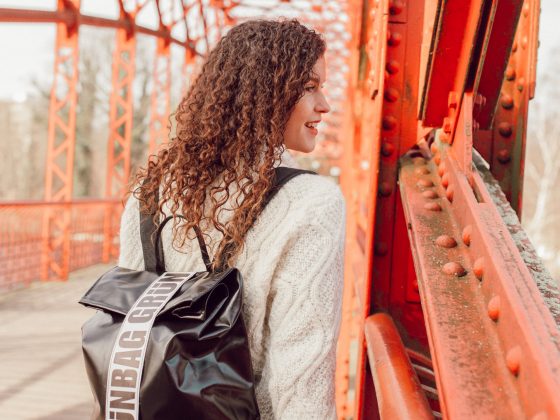 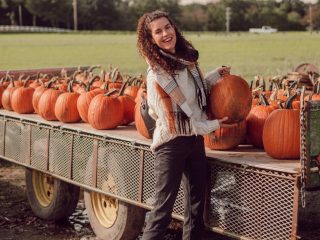 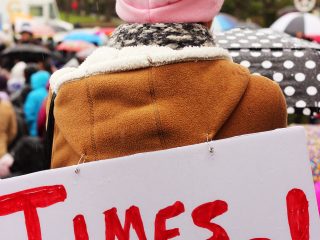 The real reason why I was absent from the blog 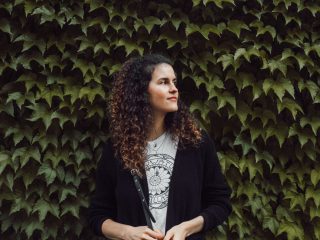 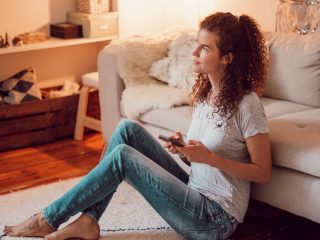 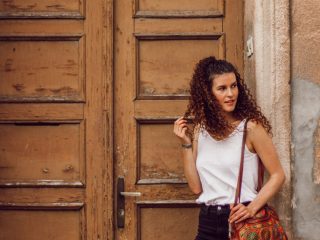 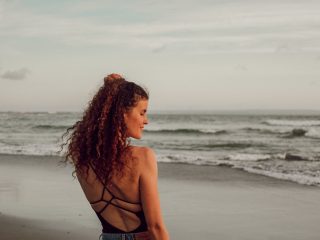 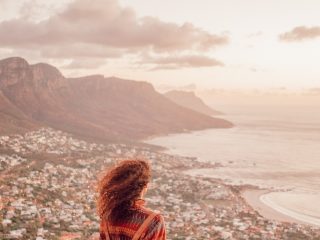